Trump not fooling all the people...yet!

One month into the Trump years is unsettling enough, but having to worry about the Trump/Bannon campaign to deconstruct government is eternally depressing. But there's a lot of time for their lies to take hold. PPP 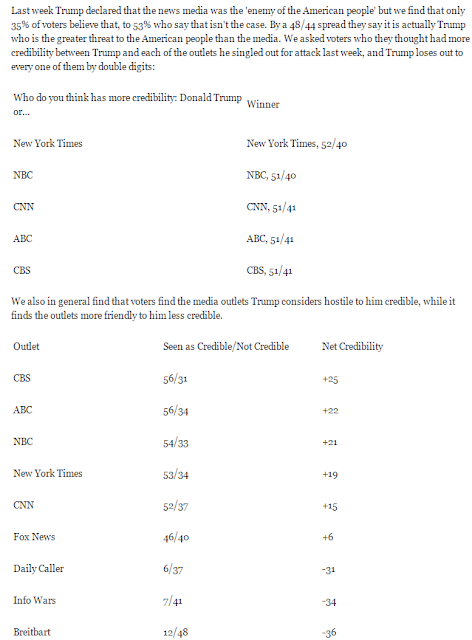 On the brighter side, people don't seem to be the willing dupes most Trump supporters are:

ACA: For the first time ever in our polling we now find an outright majority of Americans in favor of the Affordable Care Act- 50% support it to only 38% who are opposed. Only 33% of voters think the best path forward on the ACA is outright repeal, while 61% think it should be kept with whatever needs to be fixed in it being fixed.

Russia/Putin/Flynn: By a 58/29 spread, voters want an independent investigation into Russia's involvement in the 2016 election and its ties to Michael Flynn. Russia (12/61 favorability) and Vladimir Putin (8/73 favorability) continue to be extremely unpopular with Americans, and they want the government to get to the bottom of their interference in our affairs.

Ryan/McConnell Down: Mitch McConnell (25/45 approval) and Paul Ryan (37/43 approval) are both unpopular, and Democrats hold a 46/43 lead on the generic Congressional ballot.