The Republican Party keeps racking up more and more American fatalities in the U.S. each year, without a care, and it looks like they're about to double down under Trump. What a plan. It's what keeps people on edge, ignored, resentful and feeling left behind by their government.

Republicans must know their policies ends up killing hundreds of thousands of people each year, but they can't help themselves. People are dying prematurely through free market policies; air pollution, loose safety standards, medical malpractice, unaffordable health care, and "live by the gun, die by the gun" policies. Not exactly pro-life. 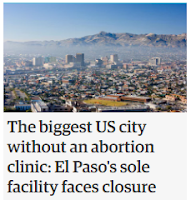 We're talking about the U.S. here:


The finding comes from a report, appearing in the September issue of the journal Obstetrics and Gynecology, that the maternal mortality rate in the United States increased between 2000 and 2014, even while the rest of the world succeeded in reducing its rate. Excluding California, where maternal mortality declined, and Texas, where it surged, the estimated number of maternal deaths per 100,000 births rose to 23.8 in 2014 from 18.8 in 2000 – or about 27%.

But the report singled out Texas for special concern, saying the doubling of mortality rates in a two-year period was hard to explain “in the absence of war, natural disaster, or severe economic upheaval”.

Similar to proposals now in other states, Texas was there first with women's health clinic cuts:


In 2011, just as the spike began, the Texas state legislature cut $73.6m from the state’s family planning budget of $111.5m. The two-thirds cut forced more than 80 family planning clinics to shut down across the state. The remaining clinics managed to provide services – such as low-cost or free birth control, cancer screenings and well-woman exams – to only half as many women as before.