I couldn't resist posting this. It's a small but yugely significant point about Trump's hyperbolic rhetoric, it's all bullshit. Here's the headline...:


Sweden has no idea what Trump meant when he said, ‘You look at what’s happening … in Sweden:’ But if you believe President Trump, something happened in Sweden on Friday night that deserved the attention of the world. However, nobody knows what that might be so far, least the Swedes. Without hesitation, Trump delivered this completely made up..."you look at what's happening last night in Sweden...who would believe this..." no we wouldn't believe this lunacy: 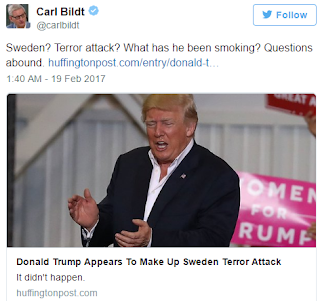 The White House already faced criticism this month after it included an incident in the Swedish city of Malmö on its list of allegedly underreported attacks. In October, arson caused smoke damage at an Iraqi community center in Malmö. A judge, however, decided that there was no evidence for treating the incident as a “terror attack” — months before the White House released the list that referred to the incident.

"What's happening in Sweden" has had it's upside... 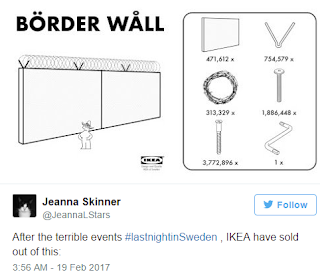