Freedom? Paul Ryan thinks..."Freedom is the ability to buy what you want..."

The Huffington Post's Jonathan Cohn is one of the best health care reporters out there, along with Sarah Cliff at VOX. If you're going to trust anybody, trust them.

People are slowly coming around to the idea that for Republicans, like Ryan, freedom means buying things; big gulps, incandescent light bulbs, guns, and of course, junk health insurance policies. If you look back at their past arguments, it's always been about buying things. The freedom "to buy what you want" is a God given freedom, untouched by silly man made "constitutions." 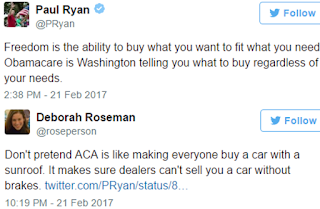 On Tuesday, Ryan tweeted an argument that he and other conservative leaders have made many times before: “Freedom is the ability to buy what you want to fit what you need. Obamacare is Washington telling you what to buy regardless of your needs.”

There’s some truth in that second sentence. The Affordable Care Act forces insurers to sell to people with pre-existing conditions … must cover “essential” services … cap consumers’ out-of-pocket spending and prohibit insurers from selling plans with annual or lifetime limits on payments … the individual mandate…

But do these requirements really mean less freedom overall, as Ryan argues? For many Americans, these requirements and the law as a whole have led to more freedom … In the old days, people could find themselves owing huge bills for hospitalization, rehab or prescriptions because they only discovered after they got sick that their junk or “mini-med” plans left out whole swaths of services or covered just a few thousand dollars worth of charges ... easy marks for scams.

The Affordable Care Act more generally, leads to more freedom rather than less … Prior to 2014 many people with pre-existing conditions could not buy useful coverage … millions of people simply didn’t have enough money to pay for it. Any insurance-related freedom these people had was purely imaginary, like the freedom of the poor to buy a yacht or a mansion, or the freedom of those without savings to retire at age 50.

The taxes and rules mean that fewer people end up worrying about crippling medical expenses, while more people get treatment for painful, debilitating or even deadly ailments.

The health care law has also provided another type of freedom: A real option to leave a job with a large employer in order to start a new business or to work part-time or to stay at home to care for a child or sick relative. “It is really incredible that this shift from involuntary part-time to voluntary part-time is not more widely known,” Dean Baker, co-director of the Center for Economic Policy and Research, has written. “It is a very important outcome from the ACA.”

Ryan in particular keeps asking why people in good health should have to pay extra for policies that cover medical services they figure they won’t need anytime soon. This is a perfectly legitimate argument. But a major goal of insurance is to protect against the unknown ― the possibility of developing cancer, having a debilitating car crash or contracting a severe infection … random accidents of birth or circumstance ― whether it’s a congenital condition like cystic fibrosis that will need a lifetime of care, pollution-induced asthma that will cost thousands for inhalers and medications, or two X-chromosomes that will likely lead to some form of reproductive health services.

Conservatives once attacked Medicare, too. In 1961, Ronald Reagan warned that if it became law, then “you and I are going to spend our sunset years telling our children and our children’s children what it once was like in America when men were free.” More than half a century later, Medicare hasn’t created a totalitarian dystopia. Instead, it has allowed generations of seniors to access the medical care they need, while sparing them the hardship and indignity of financial ruin. That’s arguably a huge increase in freedom.