The Democratic, liberal, progressive base has been asking our politicians to get a backbone for years. Well, I saw a flicker of fight in an amazing Tweet from Sen. Tammy Baldwin that gave me hope, and may be a harbinger of things to come:

She Won: That exchange has now led to this incredibly entertaining and justly deserved blowback twitter response against the arrogance of Scott Walker. Walker's Tweet provides an opening for the kind of voter feedback he so meticulously avoids in his "invite only" listening sessions:

No meeting and no vote with #SCOTUS...where have we heard that for the last 10 months...hmm, ya got me. It's that old "what goes around comes around" thing.

So "Ask Scott Walker" has now taken off, and hope upon hope, won't end anytime soon: 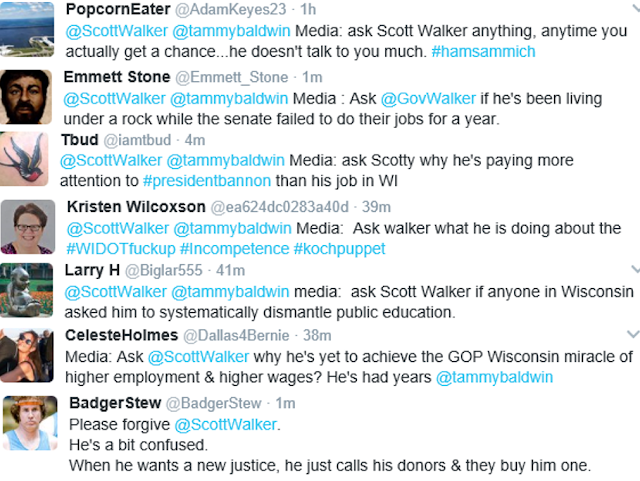 Here were a few bubble world Tweets that didn't make any sense, but could point to the problem Trumpsters have with "projection." Did Tammy Baldwin really have to be threatened or paid off to oppose Trump's supreme court nominee? Really?