After "Day without Immigrants" protests, conservative Teacher comments begs the question; still want them in our classrooms?

The "Day without Immigrants" protests didn't go over well with a few conservative teachers in a predominantly Latino Southern California school district the other day, and now they've been put on administrative leave.

This whole thing reminded me of the argument we're having today. In Wisconsin, Republicans like Rep. Robin Vos want more conservative viewpoints in our schools (college in this case), to counter the supposed liberal ideas kids get from their teachers.


"I challenge the UW System this school year to find more ways, beyond a two-page policy statement, to ensure that all perspectives, including conservative ones, are present in the classroom." 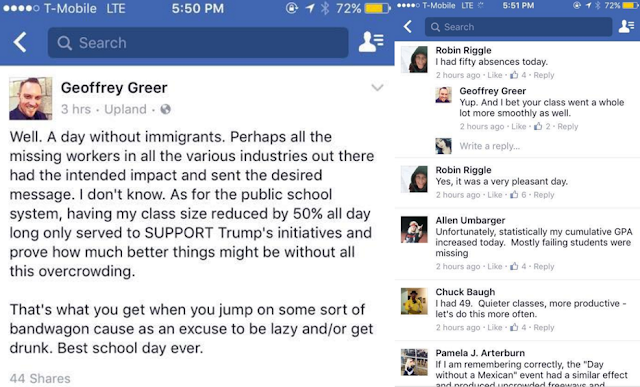 WaPo: Six high school employees ... were placed on administrative leave after they posted social-media comments insulting students who skipped classes to participate in the “Day Without Immigrants” protest. The employees said classes were quieter and grades higher with the students gone.

Why do conservatives hate protesting so much, the most fundamental First Amendment right people have in this country? Do they really believe protesters are paid by millionaires, take orders from "union thugs," or are trying to "intimidate" elected officials instead of sending a message of opposition to policy?


Cesar Jimenez, who said he graduated from Rubidoux High School in 2014, told The Washington Post the teachers should not have dismissed the students’ decision to join the nationwide boycott as a mere excuse to skip classes. Those students aren’t just kids; rather, they’re teenagers who are developing their own political views and wanted their voices to be heard.

“Condensing it down to just looking for an excuse to get drunk and be lazy, that’s just irresponsible on his part (Greer). That undermines the whole motive because it’s not about that. It’s about bringing attention to the fact that there are initiatives in our current administration that are pushing against immigration. These issues need to be brought to light.”