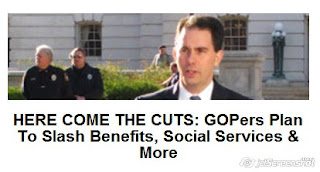 Want a preview of how things are going to go in Wisconsin over the next four years? We already have our first job killing jobs program.

Walker has said he doesn't want the state to pay $7.5 million a year in operating costs. A state transportation official has said federal aid could cover as much as 90% of that amount, as it does with the Hiawatha.

The planned rail line would operate as an extension of Amtrak's existing Milwaukee-to-Chicago Hiawatha line, and eventually could be part of a Chicago-to-Twin Cities route and a larger Midwestern network of fast, frequent trains. Plans call for starting the operation with six daily round trips at a top speed of 79 mph in 2013, rising to a top speed of 110 mph by the end of 2015.

The project was predicted to employ 4,732 people at its peak in 2012, counting direct construction jobs, workers at supply companies and government jobs. Another 55 permanent jobs would be created to operate and maintain the trains, tracks and stations. But those figures don't include the spinoff economic effects, which rail supporters say would be considerable.

The Wisconsin Department of Transportation estimates that construction jobs will peak at about 5,500 new construction jobs in 2012, and up to 9,500 new permanent jobs will be created along the route by private enterprise through the multiplier effects public infrastructure investments.