Conservatives destroy judicial branch of government, just what the founding fathers would have wanted. 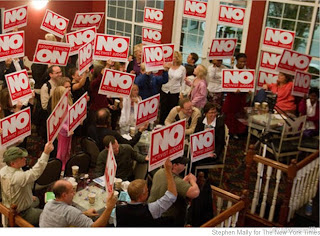 The grossly misnamed “Constitutional conservatives” continue to move toward a fictionalized version of our founding document, all the while portraying themselves the great protectors of our countries heritage.

NY Times: An unprecedented vote to remove three Iowa Supreme Court justices who were part of the unanimous decision that legalized same-sex marriage in the state was celebrated by conservatives as a popular rebuke of judicial overreach, even as it alarmed proponents of an independent judiciary.

The outcome of the election was heralded … as a national demonstration that conservatives who have long complained about “legislators in robes” are able to effectively target and remove judges who issue unpopular decisions. Leaders of the recall campaign said the results should be a warning to judges elsewhere.

“I think it will send a message across the country that the power resides with the people,” said Bob Vander Plaats, an unsuccessful Republican candidate for governor who led the campaign. “It’s we the people, not we the courts.”

They really are that dumb? The three branches of government are supposed to be independent...checks and balances...oh what the hell.

But critics of the campaign said the politicization of uncontested judicial elections represented a danger. “What is so disturbing about this is that it really might cause judges in the future to be less willing to protect minorities out of fear that they might be voted out of office,” said Erwin Chemerinsky, the dean of the University of California, Irvine, School of Law. “Something like this really does chill other judges.”

From its first decision in 1839, the Iowa Supreme Court demonstrated a willingness to push ahead of public opinion on matters of minority rights, ruling against slavery, school segregation and discrimination decades before the national mood shifted toward racial equality. Conservative groups this year launched similar campaigns in a number of the 16 states that use merit selection, targeting supreme court justices for rulings on abortion, taxes, tort reform and health care … all re-elected.

Protesters who claim judges who make “unpopular” decisions are "legislators in robes" are actually creating just that:

The judges declined requests for interviews but released a statement that decried what they called “an unprecedented attack by out-of-state special interest groups.” The statement defended the system for selecting judges but offered what a veiled warning about populist impulses to remake the judiciary: “Ultimately, however, the preservation of our state’s fair and impartial courts will require more than the integrity and fortitude of individual judges, it will require the steadfast support of the people.”

Labels: Constitution, Supreme Court of the United States
Email ThisBlogThis!Share to TwitterShare to FacebookShare to Pinterest