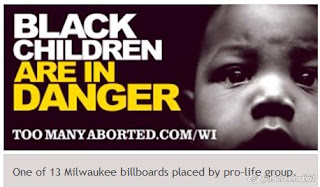 You would think that "choice" would mean just that, the choice of women to continue a pregnancy or not. Any disparities in the number of black and white abortions is based on choice, and not on any policy Planned Parenthood has in place. But you would never see that same common sense and logic applied to policies coming from of Pro-Life Wisconsin, as their billboard campaign reveals.

CapitalTimes: Pro-Life Wisconsin has teamed up with a national anti-abortion campaign to place 13 billboards in the city of Milwaukee blaming the high numbers of African American abortions in our state on what the groups claim is "Planned Parenthood's history of racism and the continuing eugenics movement in Wisconsin."

"Wisconsin is the eighth lowest state nationally in the number of abortions, but the racial disparity in its numbers far exceeds the national trends," said the communications director of Pro-Life Wisconsin. There are two different billboards.

These are sick crazy people on the fringe of society.