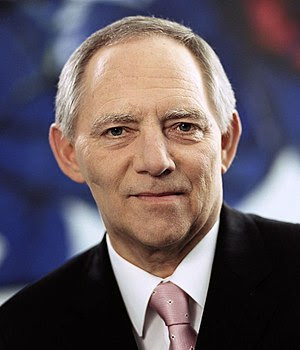 Image via Wikipedia
If you have a chance, take some time to read Thom Hartmann's "Rebooting the American Dream - 11 Ways to Rebuild Our Country: Back to the Future." Hartmann explains how our founding fathers devised a plan for a self sustaining country that supported manufacturing while putting in place protections from outside competitors.

Again, our "small government" liberty loving founding fathers came up with a protectionist plan to defend American workers and the products they made, a fact tea party Republicans would protest today as job killing regulation.

While Republicans tout free markets and outsourcing as a way to grow jobs here at home, that includes "socialist" free trader Barack Obama, America has no plans to form a manufacturing strategy like most industrialized countries. That has angered manufacturing powerhouse Germany:

Germany has put itself on a collision course with the US over the global economy, after its finance minister launched an extraordinary attack on policies being pursued in Washington.

Wolfgang Schäuble accused the US of undermining its policymaking credibility, increasing global economic uncertainty and of hypocrisy over exchange rates. The US economic growth model was in a “deep crisis,” he also warned over the weekend Berlin policymakers were also alarmed by last week’s US Federal Reserve decision to pump an extra $600bn into financial markets in an attempt to revive US economic prospects through “quantitative easing”.

On Friday, Mr Schäuble described US policy as “clueless”. In a Der Spiegel magazine interview, to be published on Monday, he expanded his criticism further, saying decisions taken by the Fed “increase the insecurity in the world economy”.

Germany’s export success, he argued, was not based on “exchange rate tricks” but on increased competitiveness. “In contrast, the American growth model is in a deep crisis. The Americans have lived for too long on credit, overblown their financial sector and neglected their industrial base. There are lots of reasons for the US problems – German export surpluses are not part of them.”