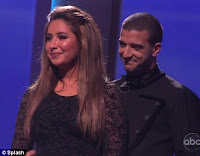 I have a relative who is just beside herself over Bristol Palin’s ability to survive week after week as a contestant, knowing she can’t dance. She really is upset. Sadly, she may not be alone:

Wisconsin State Journal: Allegedly set off by Bristol Palin’s appearance on “Dancing with the Stars,” a rural Black Earth man kept police at bay outside his home for 15 hours Monday and Tuesday before he surrendered to police.

Steven N. Cowan, 66, railed at the television as the daughter of former Republican vice presidential candidate Sarah Palin appeared on the ABC program, his wife told police Monday after she fled from the town of Vermont house … Cowan had also been under stress because of a financial situation and was receiving care for a mental health problem, the complaint states.

According to the complaint, Cowan and his wife were watching “Dancing with the Stars” when Cowan jumped up and swore as Bristol Palin appeared, saying something about “the (expletive) politics.” Cowan was upset that a political figure’s daughter was on the show when he didn’t think she was a good dancer, the complaint states.

Cowan went upstairs for about 20 minutes and returned, demanding his pistols, which had been taken by his daughter about a month ago for safety reasons. He was carrying a single-shot shotgun, which he loaded and fired into the television. Cowan continued to yell, demanding his pistols. He re-loaded the shotgun and pointed it toward his wife. She left the house and drove to Black Earth, where she
called 911. She told police she was afraid for her safety.

Cowan kept sheriff’s deputies at bay outside his home until 11 a.m. Tuesday, when he surrendered without incident, sheriff’s spokeswoman Elise Schaffer said. On Tuesday night's results show of "Dancing with the Stars," Bristol Palin advanced to next week's finals of the competition.

Stay tuned, this is starting to get ugly.

Labels: Bristol Palin, Dancing with the Stars
Email ThisBlogThis!Share to TwitterShare to FacebookShare to Pinterest