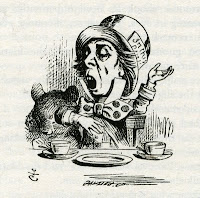 The following is one of the most detailed town hall stories I've read so far, and provides a clear picture of the alternative world our Republican protesters are so worried about. I'm reminded of this appropriate comment from author Joyce Cary that explains their desperate, backed into a corner position, "A narrow little house which becomes a prison to those who can't get out of it."

Many attendees took issue with current healthcare reform proposals, the inaccessibility of proposed bills to the public at large, stimulus packages, illegal immigrants, government programs and government spending. Some booed the idea of high-speed rail for Wisconsin residents. One insisted that the United States is a Christian country that has outlawed God, while another spoke of citizens seceding from their government.

Dan Horvatin's statement, "I'm against socialized healthcare in any form", was met by applause, whoops, hollers and cheers of agreement.

He challenged Baldwin to find anywhere in the U.S. Constitution that suggests the federal government even be involved in healthcare. He went on to argue that malpractice and tort reform would help to solve the healthcare problem.

Kirsten Hombard stated, "You love to spend our money. We've had it. Why, Representative Baldwin, do you insist on pushing for a plan that is going to bankrupt us all?" She continued, "Call it public option, call it whatever you want, it's government-run healthcare and it's going to cost trillions of dollars, according to the CBO. Why would you continue to push that plan when there are free-market solutions, Rep. Baldwin? Start saying 'no', Rep. Baldwin."

Sara Anthony explained her opposition to healthcare reform saying, "As far as healthcare is concerned, I am opposed to the government option because I haven't seen anything yet that the government has run that works."

Steve Zekoff rose to say, "I continue to be embarrassed by the fact that at least 40 million people in this country do not have health insurance. It's a moral obligation and I want to cheer you on. Thank you for the work that you're doing."

Several of those who spoke said they were disappointed in and even ashamed of Baldwin's recent decision to vote against ... cuting off federal funds to ACORN. Eric Katte asked Baldwin why she thinks tax dollars need to go to ACORN. Briefly explaining that the Bill of Attainder in the Constitution makes it illegal to single out a group or individual instead of treating them all the same via due process, Baldwin said, "I think this resembled something of the Bill of Attainment and (is) potentially unconstitutional.
Bob Wagner of Whitewater said, "I graduated from college in 1972, so I was on campus when the potheads were there. I rather resent the fact that my government supported educating my children in socialism." He added, "I really resent, I'm part of it too, that we all let this happen to our country. Our children haven't seen capitalism; they haven't seen a country with morals and values. We've all sat around and let the government outlaw God."

The crowd groaned again when Steve Voight of Lake Mills pointed out that Baldwin's website states that she is "in favor of the high-speed rail that Governor Doyle is trying to push through." He went on to ask, "Do you have the right to spend $14 million of our tax dollars to buy equipment? "That rail is not going to help me one bit."

John Debereiner told Baldwin, "I have a message for you to take back to your colleagues in Washington. It seems that we are rapidly approaching a point that we were at about 150 years ago in this country. We are coming to a watershed moment. 150 years ago, it was about states seceding from the Union. I believe that the point that we are rapidly coming to now is the citizens seceding from their government. I would ask you to share with your colleagues, that we the people, are not going to allow you to take our country from us. This is our country."

Near the end of the session, Beth Harvey rose to speak, only one of a couple in the crowd in favor of public healthcare. She was promptly booed for saying that insurance companies are not to be trusted and that a single-payer policy would be better than what we have now.