Hey Republicans, Afraid of Losing Your Freedoms? Should have thought of that before you blew up our Economy 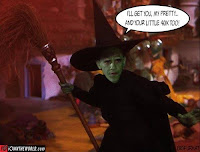 The economic crash, caused by a Republican Congress and the White House over the past 8 years, has proven the failure of the free market theory.

Those protesting the possible loss of their freedom under the Obama administration are in a constant state of denial, projecting their past failures onto the Democratic Party under the guise of socialism. Their fear of lost freedom comes a little late, because that's just what they gave America and the incoming president and congress. The last ten months, a half year after the economic crash, cannot be blamed on anyone else but the "permanent" party of conservative overreachers. Thanks for taking away our freedoms.

AP: The annual American Community Survey:
More people are delaying marriage and home-buying, turning to carpools yet getting stuck in ever-worse traffic, staying put rather than moving to new cities. Health coverage swung widely by region, based partly on levels of unemployment. More older people are working.