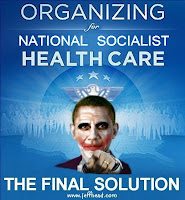 Just what are the tea bag protesters and town hall complainers thinking, if indeed they think at all, when they choose to ignore all the researched warnings about how health care costs will part them of their cherished hard earn money.

Putting aside their reasons for their angry opposition; losing their "freedoms?" and becoming a Nazi commie- socialist nation devoid of Christianity; here's what's really going to happen:

The independent Robert Wood Johnson Foundation reports, according to the Chicago Tribune:

It says in a worst-case scenario, the average state resident would spend 66 percent more on health care and employers' premiums would double ... the purpose of the report was to evaluate the cost of failing to reform the system ... if politicians drag their feet to avoid political pain, families and businesses will feel the financial pain.