Packing in a Good Breakfast 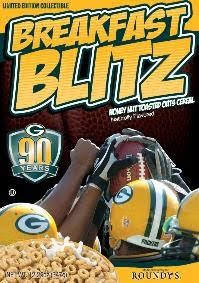 Tackling breakfast decisions should get easier with this parental Packer indoctrination cereal for kids and adults.
Journal Sentinel: The Green Bay Packers are commemorating their 90th anniversary with a breakfast cereal called Breakfast Blitz. The cereal is sold exclusively at Pick 'n Save and Copps stores operated by Roundy's Supermarkets Inc. in Wisconsin under a license agreement with the team.
The Packers are the fourth NFL team to have their own cereal, according to Craig Benzel, director of marketing for the team. They join the Philadelphia Eagles, Miami Dolphins and Arizona Cardinals on the breakfast table.
The cereal licenses represent a departure from standard NFL licensing rules, which required a manufacturer to pay for an NFL license and make products for every team in the league, Benzel said. The NFL makes exceptions for certain products to be licensed for individual teams if they are sold in local markets, he said.
Posted by John Peterson, Democurmudgeon at 9/11/2009 01:22:00 PM