When Public Schools Do Well, Bad Testing is the Reason. Isn't That Odd? 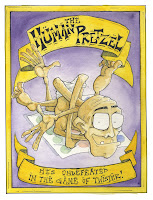 Let me get this right;

When state testing regimes show little signs of improvement in public education, it's proof government education is failing our kids, and advances the need for private school vouchers and charters. The test scores prove the public system is faulty.

When test score go up dramatically for public education, the testing regimes suddenly have always been suspect, not trustworthy, gamed to cheat the system.

I get it. That's the story here, from edweek.org. Public education critics couldn't help but twist themselves into a pretzel trying to explain how bad testing has been all along:

The recent news that 97 percent of New York City public schools got an A or B under the district’s grading system might be seen as reason for celebration, but critics suggest the grades hold little value and highlight the need to rethink the state assessment system. “It tells us virtually nothing about the actual performance of schools,” Aaron M. Pallas, a professor of sociology and education at Teachers College, Columbia University, said of the city’s grades.

Diane Ravitch, an education historian at New York University, was even sharper: She declared the school grades “bogus” in a Sept. 9 opinion piece for the Daily News of New York, saying the city’s report card system “makes a mockery of accountability.”

That's only part of their pretzel logic:

Mr. Pallas of Teachers College argues that one key flaw with the city’s rating system is that it depends heavily on a what he deems a “wholly unreliable” measure of student growth on test scores from year to year that fails to account adequately for statistical error ... recent controversy about the reliability of the New York state testing system in gauging student achievement.

The reliability of the state’s assessment system has been debated for a variety of reasons, from concerns about whether the state may be manipulating the results to make schools look better to whether the state’s exams are especially vulnerable to teaching to the test. Ms. Ravitch accused the New York state education department of rigging the testing system to produce higher scores and argued that the “double-digit gains are phony.”