Republicans Say Insurers Can Undermine and Backstab Their Boss, the Governemnt, With Taxpayer Money. 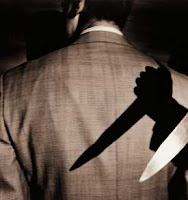 Am I hallucinating, or are the Republicans unfamiliar with the way contractors treat their employers? In this case, we the people, the government. Get a load of this, from AP:

Right, these private contractors working for the government, can undermine and politically meddle in a yet to be defined reform package. If they don't like it, they can quite taking taxpayer money. But lying is so much more profitable and timed to affect health care reform to their benefit. For example:

At least one prominent insurer has misrepresented the pending bills to frighten older Americans, the administration says.

Yet for Republicans, it's okay for an insurance company to disrespect their employer, and double crossing the government by using taxpayer money to lie and scare the elderly. That's just the way the free market works. Another words, even if you work for the government, they can't tell you what to do, especially if it effects their bottom line. I know, that would seem problematic...

But GOP leaders said the companies, whose income could be reduced by the legislation, are entitled to free speech and political debate.

They're not entitled to anything. Beside being a conflict of interest, the insurers job is to carry out their contracted work, without question.

Peter Ashkenzaz, a spokesman for the Centers for Medicare and Medicaid, defended the agency's notice to insurers. "Because
these are Medicare contractors," he said, "we want to make sure that the health plans' communications to beneficiaries are not violating marketing requirements or using protected information like Medicare mailing lists improperly."

Again, these are contractors working for the government, their boss, and the peoples representatives. They play by our rules, not theirs, and do their job or hit the bricks.
Posted by John Peterson, Democurmudgeon at 9/23/2009 11:54:00 PM