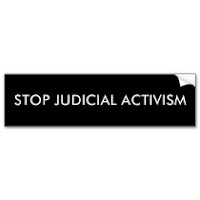 At a time when we all know the corrupting influence of corporate money in our political and judicial elections, the conservative activist courts are saying just the opposite, as if their reassurances make it so. Preceding our activist U.S. Supreme Courts eventual overturning of McCain-Feingold, the "little federal appeals court that could" decided to throw its two cents in...

NY Times: The federal appeals court for the District of Columbia ruled Friday that the government cannot restrict independent political spending by nonprofit groups or political committees, accelerating the judicial rollback of regulations aimed at curtailing the power of money in politics. In this case, the appeals court held that nonprofit groups are essentially like rich individuals, so the government cannot restrict their independent spending either. “Donations to nonprofit groups cannot corrupt candidates and officeholders,”

Judge Brett M. Kavanaugh wrote for a three-judge panel. “And to the extent a nonprofit then spends its donations ... those expenditures are not considered corrupting, even though they may generate gratitude from and influence with officeholders and candidates.” To regulate the political activities of nonprofit groups in order to ward off such potential gratitude and influence was overkill, Judge Kavanaugh wrote.

That breathtaking comment by Judge Kavanaugh, “Donations to nonprofit groups cannot corrupt candidates and officeholders,” defies reality. But then again, a Bush administrative official once said that conservatives create their own reality? The bottom line;

“We are moving toward a deregulated federal campaign finance system, where money flows freely and perhaps only disclosure laws
remain,” Richard L. Hasen, a professor at Loyola Law School in Los Angeles, wrote Friday on ElectionLawBlog.org, his Web site.

He added: “It is a world in which those with more money use their considerable funds to elect candidates of their choice and to have disproportionate influence over public policy. The unlevel playing field awaits.”