Churches Preach Politics to Protest IRS Speech Restrictions! Are They Really That Stupid? 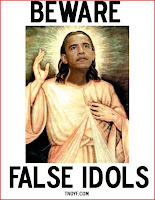 The deal between America's churches and the IRS is just that, an agreement. They don't pay taxes as long as they don't endorse candidates. They can still talk till their blue in the face about the issues confronting people today. But pastors are protesting the ban anyway to test the constitutionality of the deal. I say go for it.

If the pastors win, they lose their tax exempt status by forcing the IRS to drop it. If they don't win, the congress should vote to do away with the exemption anyway. That way, some churches will feel the ebb and flow of the political winds. It doesn't take a genius to know it's a business plan destined to fail. I'm all for it.

The Alliance Defense Fund's Erik Stanley says most of the sermons were preached this past Sunday, with a few scheduled this coming Sunday. He says the goal is to trigger an IRS action that a church can challenge in court in an effort to get the ban on pulpit politics declared unconstitutional. Barry Lynn, the Executive Director of Americans United for Separation of Church and State, says pastors can preach anything they want, but should not expect their churches to remain tax-exempt if they endorse or oppose candidates.