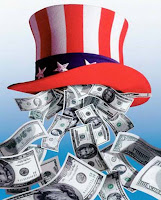 When I recently came across this story, “Google Turns Down Some of NC's Tax Incentives,” I wondered if it might be snowing in hell right now. We all know that states compete by giving away huge tax breaks to corporations and shift the burden to its citizens. When it’s time to be re-elected, Republicans tout the fact that they created jobs in the state by bringing in freeloading corporate giants. Surprisingly, people love hearing that.
The reason I’m bring this story to your attention is the court case brought against corporations (not specifally Google) that get these tax breaks. Is it constitutionally legal to favor one party over the other when it comes to taxes? According to the NY Times:

Tough economic conditions could slow expansion at Google Inc.'s server farm in the North Carolina foothills, the company said in declining a sliver of a $260 million state incentive package that would recoup up to $4.8 million in state taxes if it met job-creation and other targets at the Lenoir facility. A company attorney told a state incentives committee that it no longer wants the money or the commitments… economic conditions make it too difficult to be sure the $600 million data center complex will expand as fast as previously thought.

What’s stunning is that Google, unlike many other corporations, didn’t just take the money and run all the while knowing it probably couldn’t meet its state jobs creation commitment. But here’s a wrinkle Democrats should look into when it comes to shifting the tax burden from corporations to people.

The North Carolina Institute for Constitutional Law is pursuing a lawsuit which alleges special breaks for the corporations violate the state constitution's requirement of fair and equitable tax treatment. A judge dismissed the group's case last month, but the institute's executive director, Bob Orr, said the group is considering whether to appeal.

For many of us it just seemed wrong for states to give away their taxpayer supported benefits, the commons, to corporations simply because they might provide employment. I wonder how many other state constitutions mandate “fair and equitable tax treatment?”

Like the Republican assault on our courts with conservative activist judges, maybe Democrats have a reason to “use the courts” to provide a firewall against the move to a more corporate government to a nationwide fair tax policy.
I know. But I can dream.
Posted by John Peterson, Democurmudgeon at 12/06/2008 12:24:00 PM