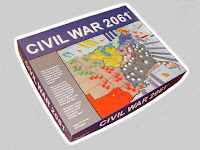 Please don’t make me go to worldnetdaily.com again. I wanted to get their side of the Supreme Courts decision not to remove Barack Obama from the presidency for allegedly not being a natural born citizen. What I found was eye off the ball topics of distraction. These are the important issues for Republican nitpickers? Read on (slightly shortened for sanities sake):
Commentary by Joseph Farah at worldnetdaily.com:

I have trouble remembering what a red state denotes and what a blue state means. I suggest to you it is the fact that I am old enough to remember when Democratic states were labeled red and Republican states were labeled blue. I would also suggest that former system made more sense and was deliberately changed by media partisans who didn't like to suggest Democrats should be associated with the color red. The current use of Republican red and Democrat blue began only eight years ago. It has been attributed to the late Tim Russert, a respected television interviewer. He first used this color scheme in 2000, according to the Washington Post, and it took. I'm not surprised it did, given the political complexion of the national press corps. I strongly suspect this not-so-subtle change eight years ago was deliberate on the part of Russert and those who so eagerly picked up on it.

In fact, Wikipedia acknowledges the newly adopted U.S. hue standard stands in stark contrast "to the system of political colors in most other long-established democracies. (It all started) In 1976 …There were deviations at some other networks, which suggests to me that activists masquerading as journalists were early on attempting to relieve their friends at the Democratic Party of the burden of identification with the color red – no matter how accurate it might be and no matter the historical precedent for it.

Why am I bringing all this up now that the election is over? Because there was no point even trying to open the topic for discussion during the heat of the election campaign. There was such unanimity of purpose behind the color conspiracy. But I propose to you it's time we – real Americans, the rest of us – stopped being manipulated like this. I would like to announce today that my news organization, WND, will no longer use the currently accepted "red state-blue state" paradigm. We won't use the reverse, either, because it is certain only to cause confusion among our readers.

I know there may be more pressing issues on your plate today. But, you have to admit, my proposal makes sense. Are you with me?

No, I hope we’re not with him. Pressing issues are first, not partisan tinkering from someone so easily confused. To me, it looks like someone doesn’t like the color red, along with its well accepted symbolism denoting anger and aggression. That’s surely not the Republican Party, is it?
Posted by John Peterson, Democurmudgeon at 12/08/2008 04:53:00 PM