Banks to Taxpayers: We Don't Have to Tell You Anything. See Ya! 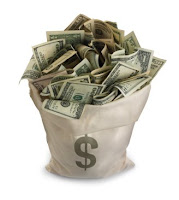 When it comes to worker wages and survival of the auto industry, lower is better, and a key to securing a LOAN by the government. But when it comes to bankers and Wall Street, no strings and no accountability are the order of the day. Ask any Republican how they can justify the double standard. According to AP:

The nation's largest banks are refusing to say how they're spending billions of dollars in taxpayer money. The Treasury Department has been dolling out cash to banks as part of the unprecedented financial bailout. But there's no system in place for monitoring what the banks are doing with the money. The Associated Press contacted 21 banks that have received at least $1 billion in taxpayer money and asked four questions: How much has been spent? What was it spent on? How much is being held in savings, and what's the plan for the rest?

None of the banks provided specific answers.

Congress rushed the bailout into law so quickly, no public disclosure was required. Now, lawmakers say, they're going to try to go back and get some answers retroactively.

I haven’t heard a cry of outrage from the same Republican union busters so concerned with wasting taxpayer money. Guess we all know why.
Posted by John Peterson, Democurmudgeon at 12/22/2008 08:53:00 PM