Day 2: Barack Obama Still a Citizen! Presidency Just Handed to Him Without Fight 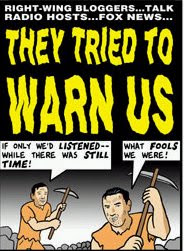 MSNBC reports: The Supreme Court has turned down an emergency appeal from a New Jersey man who says President-elect Barack Obama is ineligible to be president because he was a British subject at birth.

In an alternate universe, Barack Hussien Obama was sentenced to life in prison for perpetrating a massive hoax on the gullable American voters.

Here are the "facts" that prove the next four years will be a mistake, no matter what happens.