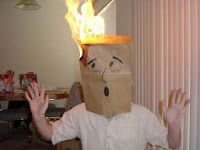 The story is sensational:
An FBI affidavit said Gov. Rod Blagojevich was intercepted on wiretaps conspiring to sell or trade the vacant Senate seat for personal benefits for himself and his wife.-CBC News
So how soon could the Republicans manufacture a conspiracy around “knowing somebody” that’s political? Immediately. As reported by the CBC out of Canada:

Earlier Wednesday, Republicans had begun to question why Obama had not commented on his connections to Blagojevich.Robert Duncan, chairman of the Republican National Committee, had called Obama's comments on the matter "insufficient at best.""Given the president-elect’s history of supporting and advising Gov. Blagojevich, he has a responsibility to speak out and fully address the issue.”

Of course, this contrasts greatly with the RNC’s lack of calling for the Bush White house to come clean on everything they refuse to address. Those were real scandels, this is one fabricated by the RNC. The article continues...

The RNC also released a quote from Obama in 2006 in which the then Illinois senator said he would be "happy" to work on Blagojevich's re-election campaign if asked. His comment came at a time that U.S. prosecutors were investigating Blagojevich's hiring practices. Obama said he was concerned about the reports but said he would not speculate to what degree the governor was involved. Representative Eric Cantor of Virginia, the new GOP House whip said, "The serious nature of the crimes listed by federal prosecutors raises questions about the interaction with Gov. Blagojevich, president-elect Obama and other high-ranking officials who will be working for the future president."

So much for reaching across the isle.

Obama's transition team have acknowledged that Obama endorsed his fellow Democrat for the governorship in the past, but have stressed the two did not have a close relationship.

Of course, those discussions never materialized in the wiretap records against Blagojevich, a fact Republicans refuse to give any importance to.

On Nov. 23, Obama's senior adviser David Axelrod said Obama had discussed the issue of the Senate seat with Blagojevich. But on Tuesday, Axelrod said he They did not then or at any time discuss the subject."

“Some say” that the Republican snakes will bite anything that moves and inject their poisonous fictions. Again, that's what "some say."
Posted by John Peterson, Democurmudgeon at 12/10/2008 05:29:00 PM