Why Is the Media Ignoring: Who Would You Want to Watch Football With-McCain or Obama? 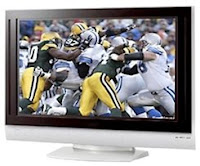 (AP) - People would rather watch a football game with Barack Obama than with John McCain - but by barely the length of a football. Obama was the pick over McCain by a narrow 50 percent to 47 percent, according to an Associated Press-Yahoo News poll Women, minorities, younger and unmarried people were likelier to prefer catching a game with Obama while men, whites, older and married people would rather watch with McCain. While fewer than one in 10 Obama backers wanted to watch with McCain, nearly one in five McCain supporters wanted to kick back with Obama.

Not to overstate the importance of feeling like you could watch football with the next president, AP offered this sharp observation: "Such views are significant because in many elections, candidates considered more likable have an advantage." Yes, significant no doubt.
McCain supporter Lanita Linch, 41, of Harrison, Ark., said she'd rather watch with Obama because he seemed like "someone you could be comfortable and at ease with," but cautioned, "If he's not a Cowboys fan, we'd have a problem." Huh oh, he’s a Bears fan. Damn! This president thing isn’t going to work out.
But there's even another reason to WORRY: The poll had worrisome news: 35 percent of Clinton supporters would rather watch with McCain.
Wait, there are even DANGER SIGNS: There was also a danger sign for McCain: About three in 10 voters are still undecided or say they may switch candidates. That group leans narrowly toward Obama as their football companion.
“…as their football companion.”
Aaaaaaaaahhhhhhhhhhh (deafening scream)!
Posted by John Peterson, Democurmudgeon at 9/18/2008 03:42:00 PM