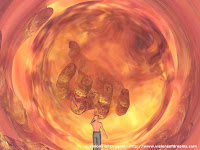 How low can a party go? The Republicans and John McCain are bravely going where no man has gone before, for political survival, to win the election. Maybe when they get to the gates of Hell, they’ll capture Osama bin Laden. Here’s how USA Today reported the action:

During a campaign stop Thursday in swing-state New Mexico, Barack Obama promised new ideas to calm the financial turmoil and help struggling families avoid mortgage foreclosure, saying "this is not a time for fear and it's not a time for panic."

Sorry Barack, it is “a time” for Republicans, the very party that has believed in and caused this economic failure, to spread fear and panic. Incredibly, the McCain Campaign would have Obama stay silent on the issue of economics, the number one worry among voters today. I’m not making the following paragraph up:

McCain aides claimed Thursday that Obama and his advisers are exploiting Wall Street's financial problems. Steve Schmidt, who worked for the Bush-Vice President Dick Cheney team in 2004, told reporters aboard McCain's plane that Obama is "cheerleading this crisis."

Astonishingly, the Democratic candidate for president, according to Republican McCain, is not supposed to weigh in as to how he would deal with Wall Street and safe guards that are needed to prevent a similar meltdown in the future. He’s just cheerleading us deeper into crisis for political gain.

I guess I should be happy comments like McCain’s are finally getting out to the electorate. Even my close born-again conservative friend called me to register his amazement that his candidate expects fellow Republicans to believe Obama shouldn’t talk about how he would fix our collapsing economy. According to the Washington Post: Obama had intended to issue his own plan on Friday, but in light of the fast-moving activities by federal officials, campaign advisers cautioned that he will hold off for now "It is critical at this point that the markets and the public have confidence that their work will be unimpeded by partisan wrangling, and that leaders in both parties work in concert to solve the problem at hand," he said.

Maybe my Republican friend will find Obama’s strategy to deal with the crisis the right thing to do as well.

Barack Obama on Friday turned to some of the most respected names in the business world for fresh ideas to end the U.S. financial upheaval and win the confidence of voters that he can turn around the American economy. He’s meeting with liberal and conservative economist: former Treasury secretaries Robert Rubin and Lawrence Summers, billionaire investor Warren Buffett, former Federal Reserve Chairman Paul Volcker and Laura Tyson, the former head of the Council of Economic Advisers under Clinton and Bush's first Treasury Secretary, Paul O'Neill, who has become a critic of the administration.

National polls show that McCain's edge has slipped since the upheaval in the U.S. financial landscape. The poll also found Americans believed Obama was more likely than McCain to bring needed change to Washington by a 65-to-37 percentage-point margin.