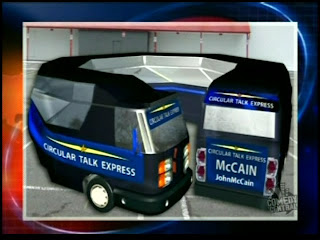 I know, I'm a little late on this comment by John McCain, but it got lost in the shuffle of my longer expositions.

Republican presidential nominee Sen. John McCain in Better Health Care at Lower Cost for Every American, in the Sept./Oct. issue of Contingencies, on fixing health care:
Opening up the health insurance market to more vigorous nationwide competition, as we have done over the last decade in banking, would provide more choices of innovative products less burdened by the worst excesses of state-based regulation.

Barack Obama, appearing at Bethune-Cookman University in Daytona Beach, Fla., mocked his rival for sounding out of touch at a time when Washington is moving rapidly to re-regulate the financial industry to curb the excesses that put the system into near-paralysis in the past week.

"So let me get this straight -- he wants to run health care like they've been running Wall Street," Obama told the audience. "Well, Senator, I know some folks on Main Street who aren't going to think that's such a good idea."