McCain Will Punch, Beat Up and Scowl at Really Bad Economy Because He's Tough...Seriously? 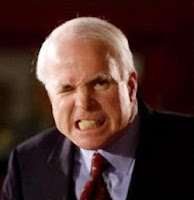 With the economy tanking due to the once "infallible" Republican economic theory, which is no longer a theory (it doesn't work), John McCain is trying hard to distance himself from his deregulation mantra. This ad portrays McCain as an in your face fighter, instead of a thoughtful level head problem solver. You are really going to like the NY Times look at the ads accuracy. McCain complains about the greed of Wall Street, yet it wouldn't have been so greedy with regulation, or is that too obvious an answer? All I can say is that it couldn't have happen to a more deserving liar.

ACCURACY According to a 2007 study by the International Labor Organization, workers in Norway are the world’s most productive (when measured on an hourly basis), followed by the United States and France. Mr. Obama has offered detailed proposals on the economy, for stemming the mortgage default crisis and channeling investment into activities that will generate new jobs. He would raise capital gains taxes as well as income and Social Security taxes on those earning more than $250,000 a year, but the notion that he would also increase taxes on middle-class voters has been repeatedly debunked. Studies have found that Mr. Obama would offer most Americans a tax cut three times the size of what Mr. McCain proposes. Finally, Mr. McCain’s record has favored deregulation of the financial industry, a factor that analysts say has contributed to the credit crisis, and opposed creation of a government agency to oversee Freddie Mac and Fannie Mae.

SCORECARD Mr. McCain got himself into trouble on Monday by arguing that “the fundamentals of our economy are strong” despite the Wall Street crisis. This advertisement is an effort to rebound from that much-criticized statement ... But he has on occasion also acknowledged that economics is not his strongest suit, so with the financial markets drifting into uncharted waters, it is hard to tell if the experience argument will convince voters. LARRY ROHTER
Posted by John Peterson, Democurmudgeon at 9/17/2008 11:32:00 PM