As we near the presidential election, the Republican Party in Wisconsin has succeeded in getting conservative media headlines, promoting the myth of voter fraud. Here in Madison, one of the most liberal cities in the country, our only daily newspaper is the conservative Wisconsin State Journal. How did that happen? Media consolidation and a bad economy (downsized staff and marginally circulated papers discontinued due to lost ad revenue).

Here's how the State Journal promoted voter fraud in the Sunday edition. Not only does it perpetuate the myth, but not so subtly reminds everyone that voting might be more trouble than it's worth, creating long lines and a possible wasted trip to the polls. It's just what the state GOP was hoping for. What else would a voter think after reading "Voters may be nervous," "Mix-ups and a lawsuits bring uncertainty" and "So what's a voter to do?" 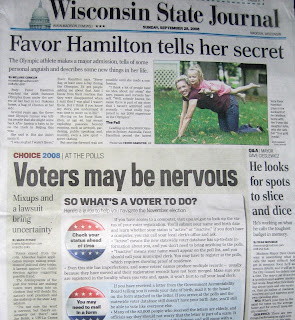 The AP continues to show it's ultra conservative stripes with this prominent photo of John McCain next to the headline, "Congress expected to pass rescue package." Like McCain had anything to do with the final outcome of the bailout. If your just glancing at the story, you'd think McCain smiled down upon the Congress and made the rescue plan so.