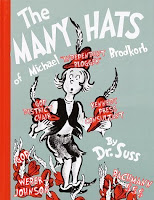 This is the case of “imaginary hats.”

Alaska Governor Sarah Palin seems to have a few around to suit the occasion. This story is really a bizarre one, so let’s start with the set up from the Washington Post:

For months, the confrontation mounted, a face-off that arguably held in the balance the fates of two of Alaska's biggest industries. On one side were companies hoping to open Pebble Mine at a huge gold and copper reserve adjacent to one of the world's largest salmon runs, Bristol Bay. On the other side were fishermen and environmentalists pushing a referendum that would make it harder for the mine to open.…and throughout it all, the state's highly popular first-term governor, Sarah Palin, held back. Alaska law forbids state officials from using state resources to advocate on ballot initiatives.

And now let’s get to the issue of “invisible hats.”

Then, six days before the Aug. 26 vote, with the race looking close, Palin broke her silence. Asked about the initiative at a news conference, she invoked "personal privilege" to give an opinion. "Let me take my governor's hat off for just a minute here and tell you, personally, Prop. 4 -- I vote no on that," she said. We're going to make sure that mines operate only safely, soundly."

With the help of Palin’s invisible hat exchange:

The pro-mining coalition fighting the referendum had placed full-page ads with a picture of the governor and the word "NO." The initiative went down to defeat, with 57 percent of voters rejecting it. Three days later, Palin was named Republican Sen. John McCain's running mate, throwing Alaska into a media frenzy.

The question is can Palin legally change “invisible hats” like that?

The state ethics panel is examining whether her comments violated the law against state advocacy on ballot measures; it had already ruled that a state Web site was improperly slanted toward mining interests.

Some in Alaska are questioning the ability to use “invisible hats.”

Most irksome to initiative proponents was Palin's effort to cast her intervention as "personal.""We were just like, 'When does she have her hat on and when does she have it off?' " Tim Bristol, Alaska program director for Trout Unlimited said. Former governor Tony Knowles, a Democrat who lost to Palin in 2006, went further and said she may have violated the law against using state resources to advocate on initiatives. He said he never took such a decisive stand on a ballot initiative.

"She says, 'I'm going to take off my governor's hat,' but the only reason the press was there was that they were called to a press conference by the governor," he said. "Being governor is not a costume -- you either are the governor or not."