Scott Walker decided to present his "optimistic vision" of the state with a few recent tweets trashing policy criticisms on the "anger and hate" filled "liberal Far left:"

So let's take a look at the what Walker calls an "optimistic vision for the future," along with a few other examples that are anything but. 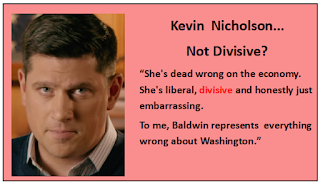 The Democrat Party has wholesale rejected the Constitution and the values that it was founded upon. So I'll tell you what: Those veterans that are out there in the Democrat party, I question their, their cognitive thought process. Because the bottom line is, they're signing up to defend the Constitution that their party is continually dragging through the mud."

...or Wisconsin's own retiring Paul Ryan, whose vision of the future does not include tackling the problem of mass shootings in our schools: 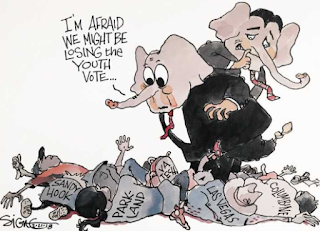 Dumb Ron Johnson's Positive Vision of the Future sees "families, renewed faith" as the solution to mass shootings in schools: Hey, it might take awhile - a half-century or so - but cultural norms might "likely" change?

(On) gun control, in the wake of the high school shooting in Texas that left 10 dead and 10 injured ... Johnson said federal legislation is not the answer, because gun violence is a bigger cultural issue.

"Solutions that will have some impact are going to more likely come from families, renewed faith, communities, from states than anything the federal government's going to pass."