Wisconsin Dairy Farmers abandoned by our every Republican; Sensenbrenner, Duffy, Grothman, and Gallagher!!!


Republican Lobbyist wants to ditch "America's Dairyland" on our License Plate, a tradition since 1940 : Rural conservative farmers, are you getting it finally that your party has ditched you for Foxconn?

We've been America's Dairyland — at least on license plates — for 77 years. Wisconsin Manufacturers and Commerce President Kurt Bauer told a group Monday that it might be time to rethink the dairy-flavored license plate slogan. Bauer says that other slogans like 'Forward' might be more appropriate to modernize perceptions of the state's economy, rather than just focusing on agriculture.

Dairy Farm Labor Shortage Ignored by House Republicans Ryan, Sensenbrenner, Duffy, and Gallegher: Paul Ryan won't bring up the Deferred Action for Childhood Arrivals (DACA) program, so many frustrated Republicans are trying to force a vote. Here are the GOP states on board: 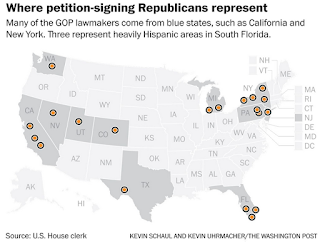 Oh, did you notice every one of our dairy state Republicans in Wisconsin did nothing? Rural dairy farm voters, take note, they're not fighting for you.

Michigan is seriously trying to help dairy farmers in stay in business:


Republican Rep. Fred Upton, for instance, represents a farm-heavy district in southwest Michigan where apple growers, asparagus harvesters and dairy farmers all rely on immigrant labor. Trips around the district routinely mean talking to farmers who fret over the potential loss of their workforce and constituents who are living in legal limbo.

Just this month, Upton said, he met a father of two who is married to an American and rides a bike to work because he doesn’t have a driver’s license. “He’s scared to death he is going to be picked up for whatever and sent someplace else, and it is frightening,” Upton said. “You sit down with these folks, and, I mean, people cry.”

Rep. Chris Collins (R-N.Y.) stands apart from the other signers in many ways: He occupies a safe Republican seat and was among Trump’s earliest supporters in Congress. But his western New York district is home to hundreds of dairy farms that rely on immigrant labor.

“Right now, my dairy farmers are saying to Republicans: You’ve got the House, the Senate, the White House, and you’ve got to give us a legal workforce, and I agree with that,” he said. Collins, who favors a conservative immigration bill that would set up an agricultural guest worker program, acknowledged that the House may never be able to pass a bill.

No effort at all by America's Dairyland representatives!!! They can't even muster up the effort to make it appear they're interested like Rep. Collins suggested:

“But then those of us can go home and say we did our best,” he added. “I fought for you and I’m willing to go against leadership to fight for you, and that’s all you can expect out of me.

And this is happening at a bad time...