Scott Walker's desperate and transparent attempt to pay off voters with a $100 check per child this summer is now getting national attention, and it's a head-scratcher for even conservative economists. 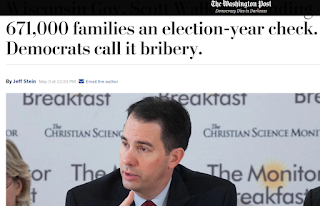 Washington Post: To (Walker's) critics, who note that Walker is a few months away from a tough reelection bid, it looks like campaign-year bribery of the up to 671,000 families who could receive checks.

And to independent economists, it's a mystifying piece of tax policy that has no clear long-term economic purpose and few, if any, recent comparable examples, given that tax breaks are traditionally incorporated for tax filing season — not in the months before an election.


1. “This is really weird. I have never heard of anything like this,” said Richard Auxier, who tracks state tax policy for the Tax Policy Center, a nonpartisan think tank.

2. Scott Drenkard, a tax expert at the Tax Foundation, a right-leaning think tank, was also puzzled. “This is definitely odd and unique. I haven’t seen anything like it before," he said. "It’s political catnip, but it’s hard to see how it improves economic outcomes.”

3. “Claiming it midyear is a real departure from how we usually interact with the tax system,” said Elaine Maag, another tax expert at the Tax Policy Center. “It’s very difficult to understand the policy rationale here. There’s not some crisis in Wisconsin where people need cash today, as opposed to when they were filing their returns a few months ago.”

Gee, there must be some other reason? More goodies too just to cinch the deal...


The legislation also created a “back to school” sales tax holiday, waiving the state's 5 percent sales tax for the first five days of August on some purchases of schools supplies, clothing and computers.


Walker's tax break looks like a brazen publicity stunt by a vulnerable incumbent at a time when Democrats appear to have political momentum.“It's literally a guy saying, 'I'm Scott Walker running for reelection, have some money!' " said Mandela Barnes, a Democratic candidate for lieutenant governor in Wisconsin. “Everyone I've talked to sees it as a blatant payoff.”

State Rep. Jason Fields (D), said he voted for the package. He said “Nobody will vote or not vote for the governor over $100.”

And that my friends is the way some Democrats think, at least until they begin to wise up.
Posted by John Peterson, Democurmudgeon at 5/03/2018 05:15:00 PM