I want everyone to health care, everyone!!! Where every doctor is your doctor, and every hospital is your hospital. But, I am enjoying Trump voters getting their just desserts:

After years of decline, new data suggests that America's uninsured rate is back on the rise.

The nonprofit Commonwealth Fund released new data Monday showing that the uninsured rate rose in the first few months of this year, rising from 12.7 percent at the end of 2016 to 15.5 percent in the first three months of 2018 ... Trump administration actions seem to be hurting the exact same people who put the president in office. One of the findings was that the uninsured rate rose only for Republicans, not Democrats. 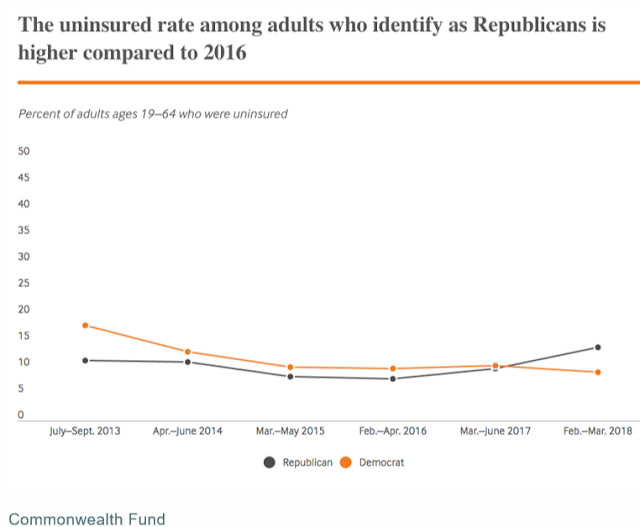 Remember this story from just a few days ago:


The Corporate Plan to Groom U.S. Kids for Servitude by Wiping Out Public Schools: “One of the ways I think that they try to avoid a populist backlash is by lowering everybody’s expectations of what we have a right to demand as citizens.

Work without pay for Your Health Care? Wow, talk about corporate servitude! While Scott Walker jacks up the work requirement for food stamps to nosebleed levels (30hrs) so he can force people into low wage jobs, Ohio's Gov. John Kasich is blunter about his intentions:


“Ohio Seeks To Impose New Medicaid Work Requirements”: Ohio Gov. John Kasich (R) officially submitted a request to force the roughly 700,000 people enrolled in the state’s Medicaid expansion to prove they’re working at least 80 hours per month. If the waiver is approved, Ohioans unable to find work would have to get placed with an organization in their county and work without pay to earn the value of their health care benefits.” The waiver may violate ... the Fair Labor Standards Act.

Ya think? Tell me more about Ohio's plan for indentured servitude:


“If an individual isn’t working, they are sent to the county, and the county places them in different ‘work experience’ sites — usually a local charity or non-profit where they would do clerical work,” McGarvey explained. “They don’t get paid by the organization they’re placed at; they’re just earning enough to meet their benefits requirement. If you do the math, it doesn’t come out anywhere close to the minimum wage. It’s closer to $2 to 3 an hour.”