Yup, another story...I'm not quite sure why rural conservative farmers keep voting for Scott Walker after he just keeps making things worse. What is happening, seriously?

It’s not crop prices that keep Shane Goplin up at night. It’s infrastructure.

Goplin, who grows corn and beans on about 3,000 acres in northern Trempealeau County, has seen the drive to his fields quadruple thanks to weight limits that keep him from driving trucks and harvesters across aging bridges.

New weight restrictions were placed on nearly 200 Wisconsin bridges — most on county and town roads in the western part of the state — this spring. As a result, farmers and truckers have been forced to take detours to get their products to market and haul half-filled loads from “landlocked” fields.

“This is a very serious concern for us. We want to make sure farmers can get to and from their fields,” said Rob Richard, senior director of governmental relations for the Wisconsin Farm Bureau. “If they can’t make the quickest, most efficient route they’re just adding wear and tear to other roads. … then it becomes a larger issue.” 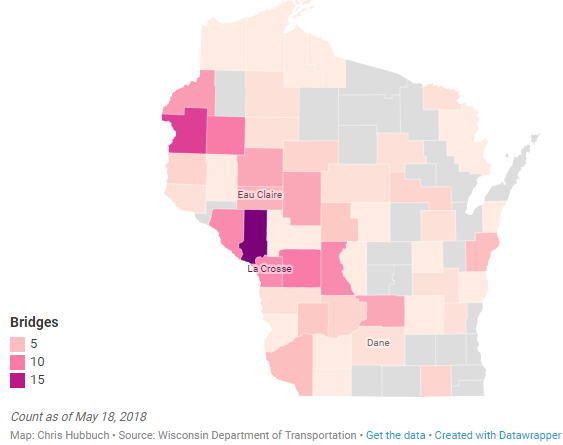 While Walker and our congressional Republicans ignore the plight of the entire dairy industry, they're now allowing the rural network of roads to disintegrate for every other farmer trying to make a living, while the cost of their business and equipment skyrockets. Add to that slow or no rural broadband:


“It’s unacceptable in an agricultural state like Wisconsin that we have no schedule for when these bridges are going to be replaced,” said Craig Thompson, president of the Wisconsin Transportation Development Association, a coalition that supports increased investment in the state’s transportation network. “We need a schedule.”

Bill Freise, who hauls about 150 to 175 truck loads of grain to La Crosse each year from his Melrose farm, said bridge postings in recent years have forced him to find a series of new routes.“That’s not the end of the world. But someplace along the line we have to address our infrastructure,” Freise said. “What we’re looking at here is just the tip of the iceberg.”

UPDATE-Tuesday, 5/29/2018: Oh No, Bridge Collapses during Walker reelection efforts!!! It's amazing how much additional spending Walker is able to stomach during election years? State roads and bridges are crumbling, while Walker repackages much-needed maintenance revenue as budget surpluses to justify tax cuts? Wake up...

WPR: In a press release issued by Gov. Scott Walker's office on Friday, Walker announced $76.4 million in state aid going to 113 bridge projects scheduled for a program cycle running from 2018 to 2022. The current state budget included an increase of $20 million to the DOT’s local bridge program. Walker said, "We are providing the largest increases to local road and bridge aids in 20 years.

A very grandiose Trumpian declaration indeed. In other words, only collapsing bridges will be replaced...as "needed to achieve safety."


WISDOT Secretary Dave Ross echoed the governor's applause of the "Replace-In-Kind" program ..."This means we're going to build exactly what is needed to achieve safety and to improve the transportation infrastructure."