We hear a lot about liberal traitor George Soros, because he's one of the few billionaires throwing money at the Democrats. He's bad, real bad.

Heroic conservative billionaires are smarter and real Americans. They've created a network of political front groups, think tanks, and "charities" that influence local races with lots of outside money. 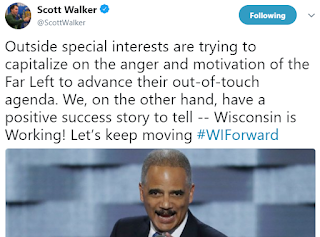 ...or this about those nasty extremist billionaires... 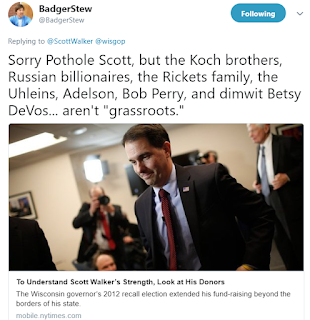 Paul Ryan's "Extreme Billionaire" Con + $30 Million: So Republican hate those extreme out-of-state billionaires? And yet Paul Ryan, caught by MSNBC, went out and cleverly raising $30 million from billionaire extremist Sheldon Adelson, in Nevada? Think any of that money will make it to Wisconsin? We'll be waiting for a Scott Walker apology...

“The long-sought donation was sealed last week when, according to two senior Republicans, House Speaker Paul Ryan flew to Las Vegas to meet with the billionaire at his Venetian Hotel (with) Norm Coleman, the former Minnesota senator who chairs the Republican Jewish Coalition.

“As a federally elected official, Ryan is not permitted to solicit seven-figure political donations. When Ryan (R-Wis.) left the room, Coleman made the ask and secured the $30-million contribution."