Wow, I would not have thought any of the following examples of extremism was possible, but I was wrong.

And oh yeh, they want our unconditional love and respect?

1. Not the Right Time, don't Politicize Mass Shootings? It's a common refrain you hear Republican say all the time, but where are the critics now, and why didn't this get any real coverage. This speaks volumes about the conservative mindset on guns:

CNN is reporting as many as eight people have been murdered at Sante Fe High School in Texas ... With students still being screened on the lawn of the high school, with eight of their peers and/or teachers deceased, at least one Trump supporter decided this was the time to put on his MAGA hat, grab his American flag, strap his open-carry pistol to his hip and head on down to the high school.

As Republicans push armed security and teachers as a diversion from actual gun regulation, the school board said the security policy and procedures at Sante Fe High School worked?:


“They believed they were a hardened target, part of what’s expected today of the American public high school in an age when school shootings occur with alarming frequency,” The Post writes.

The Post quoted the school board president as saying that the system worked, as only 10 were killed by a shooter using a shotgun and pistol he took from his father.

“My first indication is that our policies and procedures worked,” Rusty Norman told the paper. “Having said that, the way things are, if someone wants to get into a school to create havoc, they can do it.”

2. Just One Bozo on this Deportation Bus: The Trumpian age of Republican politics is upon us, as they redefine far-right. Conversely, this just makes moderates look like 98 lb liberal weaklings. With major declines in the labor market and with record low birth rates, the war on immigrant labor is another devastating economic misstep that will affect the U.S. for decades to come:

Daily Beast: Republican Michael Williams, a Georgia state senator and a long-time Trump supporter
running for governor of Georgia is bringing his racist “Deportation Bus Tour” to Cracker Barrel restaurants—and Cracker Barrel isn't having it. , is currently polling dead last in the state’s Republican primary ... Williams “Deportation Bus” (is) plastered with slogans like “FILL THIS BUS WITH ILLEGALS” and “DANGER! MURDERERS, RAPISTS, KIDNAPPERS, CHILD MOLESTORS [sic], AND OTHER CRIMINALS ON BOARD.” Williams said his bus tour was prevented from leaving Decatur and going to Athens by violent "Antifa and radical liberals" who blocked the bus from leaving. 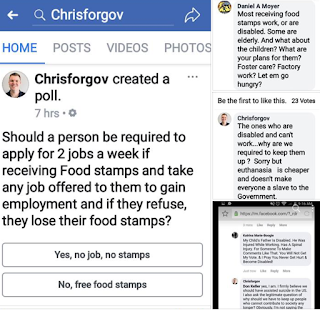 Oklahoma GOP governor candidate Christopher Barnett blames hackers for Facebook post proposing euthanasia for disabled people ... the administrator initially posted a poll about food stamp requirements — and then made comments claiming euthanasia is a solution to the “issue” of the poor and disabled. A user commented on the poll post. “Most receiving food stamps work, or are disabled.  Some are elderly.”

“The ones who are disabled and can’t work…why are we required to keep them?” the Chrisforgov account responded. “Sorry but euthanasia is cheaper and doesn’t make everyone a slave to the Government [sic].”

Defending his now-deleted comments, the account admin mused as to why American taxpayers should “have to keep up people who cannot contribute to society any longer? If they can take care of themselves without Government assistance, great,” the comment continued. “If not, let them starve and die. Easy as that.”

Though the comments have since been deleted, the account admin wrote that they “stand by” the remarks in the poll thread, and later that day wrote that the interaction had been “fun.”

Appealing to the base, Barnett then used the GOP tactic of "death threats" to jack up his far-right creds. Of course, he's unintimidated...oh, isn't that the title of Republican Gov. Scott Walker's book:

Labels: Party of Trump
Email ThisBlogThis!Share to TwitterShare to FacebookShare to Pinterest