It seems the bond between Trump Republicans and farmers isn't about to be broken anytime soon. And I can't figure out why.

I will admit Democrats have done little to help advance pro-rural community solutions. But the growing problems farmers are facing daily have little to do with a handful of nagging regulations industry lobbyist say will kill farming.

My gut feel is that these are deliberate distractions from actual solutions that farmers and rural businesses everywhere need now, along with faster broadband connections. WPR: 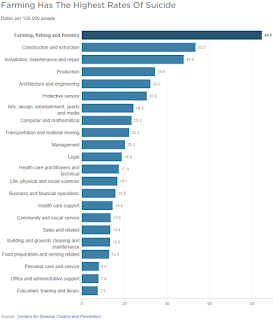 Farmers have seen uncontrollable factors like droughts and storms and commodity prices threaten their livelihoods. In recent months, President Trump's trade policies have added fears of a trade war with China, the loss of friendly trade agreements and instability around the farm bill to the list. The string of political shifts have shaken farm country.

Matt Purdue of the National Farmers Union say the instability comes at a time when farmers are already in crisis ... when the U.S. Department of Agriculture is projecting net farm income could fall to a 12 year low. Those slipping prices have meant existing crop insurance programs, which guarantee farmers a minimum price for what they plant, aren't helping to keep farmers solvent.

Many of President Trump's farm state supporters in the Senate are starting to worry that the president's policies and the political fight in the House are taking their toll on farmers. "A lot of these folks are really concerned and it's gotten to the point where in some areas there's been suicide hotlines that have now been established for more than a year," said South Dakota Senator Mike Rounds. "They want the president to succeed, they want him to be strong but they want to know what his end game is. Are you going to provide us with protections in the farm bill so we know that if we are hurt by the negotiations with regard to tariffs with China, is there something that is going to be able to get us by."

Bob Worth, a soybean farmer in Minnesota, said the frustration is growing in rural America. "You know, rural America really did elect President Trump and as of today, we're not mad at him," Worth said. "He's done a lot of great things for us. He created some he's also created some hardship for us too."

Trump Has "Done a lot of Great Things" for Farmers? At the conservative website The Daily Signal, one rural contributor wallowed in "grateful" and "celebrated" servitude to leader Trump, the Obama slayer, praising the small things he's attacked like rescinding...


1. The “Waters of the United States” rule ... Thankfully, Trump signed an executive order to rescind the Waters of the United States rule. (Me: Ignoring science and water protection, House Speaker John Boehner used every GOP hotbutton imaginable- “The administration’s decree to unilaterally expand federal authority is a raw and tyrannical power grab that will crush jobs. [T]he rule is being shoved down the throats of hardworking people with no input, and places landowners, small businesses, farmers and manufacturers on the road to a regulatory and economic hell.”

2. The EPA under Obama banned a commonly used insecticide that had been approved by its own science advisory panel, chlorpyrifos. Thankfully, Trump’s EPA administrator, Scott Pruitt, lifted the ban as they continue to ensure that the product is safe for use as an insecticide. (ME: The graphic here says it all. If you're "pro-life," why aren't you trying to protect fetuses from this chemical? Because you're not.) 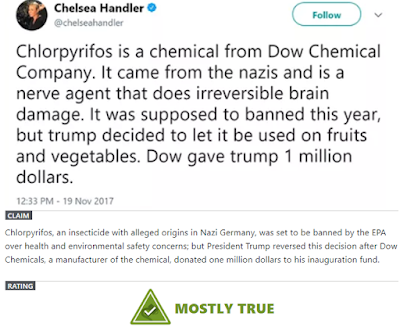 Or this feel-good challenge over a simple once a year general statement requiring no specialized equipment...


3. ... livestock farmers would be required to report emissions of greenhouse gases coming from livestock waste. Livestock farmers should be grateful for the support of the president ... (any facility emitting over 100 pounds per day of ammonia or hydrogen sulfide via animal waste (roughly 208 head) will be subject to CERCLA.)

This is another major win for agriculture and for rural America, and it deserves to be celebrated.