A report comparing Democratically run Minnesota and swirling Republican pit of Wisconsin is getting a lot of attention. The Economic Policy Institute (EPI) compared actual economic numbers based on policy pushed by both Minnesota Gov. Mark Dayton and Wisconsin's Scott Walker.

Note: Walker continues to use the GOP's Great Recession against the Democrats like it was their fault, and oddly brags about an Obama economy Republicans criticized as "too slow." See if you can see a moment where Walker's trend line below did not mirror the national trend.

The irony, Walker posted the proof himself: 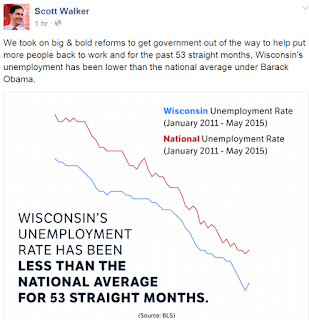 Minnesota Jobs Beat Wisconsin's: It's clear supply side/big corporate servitude does not serve the public or raise their incomes-provide health care-produce green energy and create jobs. Before we take a quick look at the differences, the U.S. Bureau of Labor Statistics, the "gold standard" of job metrics, reported...WPR:


Minnesota Passes Wisconsin In Total Jobs ... 2017 Was The First Year In Recent History That Wisconsin Fell Behind Its Midwest Neighbor ... Minnesota nudged ahead of Wisconsin by 3,096 total jobs. Wisconsin still has almost 219,000 more residents than Minnesota, and just a decade ago, it had nearly 98,000 more jobs. 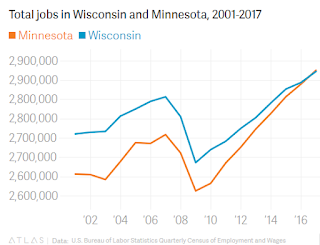 University of Michigan Labor Economist Donald Grimes said what stuck out to him was that Minnesota had added more jobs than Wisconsin every year since 2010. "The fact that it's every year is somewhat remarkable," Grimes said. 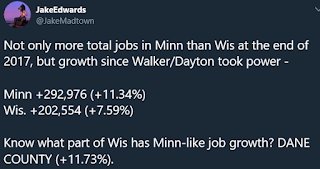 Minnesota smokes Walker's Participation Rate: Oh, and what about Walker's biggest bragging point, and a preoccupation of the far-right, the labor participation rate?


Minnesota's labor force participation rate — the percentage of the overall population that is part of the workforce — is 70.5 percent, which is slightly higher than Wisconsin's 68.9 percent.

Walker's war with Milwaukee Killing Jobs: You'd think the former executive of Milwaukee County would show a little more kindness. Also, you would have thought Milwaukee's close proximity to Chicago, creating a possible economic hub, would give it an advantage over lonely Minneapolis-St. Paul:


Governor Walker and the Wisconsin state legislature have pursued a highly conservative agenda centered on cutting taxes, shrinking government, and weakening unions. In contrast, Minnesota under Governor Dayton has enacted a slate of progressive priorities: raising the minimum wage, strengthening safety net programs and labor standards, and boosting public investments in infrastructure and education, financed through higher taxes (largely on the wealthy) ... a compelling case study for assessing which agenda leads to better outcomes for working people and their families ... By virtually every available measure, Minnesota’s recovery has outperformed Wisconsin’s.

On every economic measure, Cooper found that Minnesota outperformed Wisconsin:
Now, tell me why Democrats are still having a hard time shaping a common easy to understand message?
Posted by John Peterson, Democurmudgeon at 5/23/2018 08:29:00 PM