Like a slum landlord, Scott Walker is an absentee manager of our state, letting transportation infrastructure crumble. The same can be said for everything else we stopped spending money on; K12, the UW, state parks, the environment, disappearing dairy farmers, mass transit, rural broadband...and Walker wants another term?

Walker governs to fulfill a certain ideological end, putting no effort into trying to solve the states real-world problems. How else can you explain why other Republican states have dramatically raised their gas taxes to meet their growing infrastructure needs but Walker's Foxconnsin hasn't?

But it's not just me saying this: 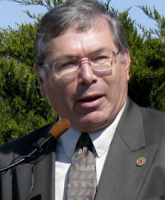 Mark Gottlieb, 61, resigned as DOT secretary in December 2016 after a six-year tenure … He is frustrated by what he says is a disingenuous portrayal of the facts on transportation and troubled that the state is neglecting crucial road improvements. Walker wrote in the June 2016 letter. “Proposed spending on mega projects in Southeastern Wisconsin should be minimized.” Prescribing a specific cabinet agency’s budget request is atypical, Gottlieb and others familiar with the process say. “We got to a place where the facts were being ignored in favor of political spin,” Gottlieb said.

As Walker explained, and his spokespeople continue to reinforce, that...:


"Gov. Walker (said) he will never support a revenue increase for roads without an equal or greater decrease in taxes elsewhere."

The tax cuts Walker has championed, including eliminating the state's portion of the property tax, the child tax rebate and sales tax holiday, have not triggered an increase in transportation spending.

Former Transportation Sec.Gottlieb said, “Don't they claim to have cut taxes by billions of dollars? Taxes have been cut but there has been no corresponding increase in transportation revenue.”

Walker's Charge Card "Spending" on Roads: Walker is once again setting Democrats up as "tax and spenders;" making them pay for road rebuilding through tax increases when they finally take back the reigns of government:

Former Department of Administration official George Mitchell, also a school choice advocate and has donated more than $15,000 to Walker, said, “Whether it’s under Gov. Walker or under a different governor, the problem they faced last time is going to be there and worse. The state is now in a big fix because of the failure of a Republican-controlled government to honestly confront the problem and deal with it, and that goes to the executive branch in the east wing.”

Walker knows infrastructure is a Democratic Party priority. He also knows voters hate tax increases. It's a tactical thing, and conservative voters love it. So Democratic spending will get future Republicans elected:

...Walker fully repaid the $1.4 billion Gov. Jim Doyle transferred from the state transportation fund ... much of that through borrowing, according to figures from the LFB.

...Walker “has budgeted $3 billion more in actual dollars into transportation than his predecessor. Local road aids are the highest ever.” Much of Walker’s “actual” dollars were borrowed dollars, according to LFB figures. And although local road aids have increased, they have come at the expense of total state highway spending, which, according to LFB figures, is the lowest it has been in 10 years. Total highway funding has been on a steady decline during Walker’s tenure, from $3.11 billion in the 2013-15 budget to $2.79 billion in 2015-17 to $2.54 billion in 2017-19, according LFB reports. Money allocated for the highway improvement program is down 8.8 percent from the last two-year budget, according to the LFB.

Walker, like Trump, filling Departments with Cronies: Would private corporations hire unqualified people to manage their business? But Walker would:

In 2016, Walker replaced Gottlieb and his deputies with Ross and two deputies from the Public Service Commission. Gottlieb shook his head at the move. “Of these three people, they had a combined total of zero days experience in transportation. It is very a complex agency and to install a set of top leaders who have no experience in that industry I think was a mistake.”

From Walker's "what  you don't know won't hurt you" Department: 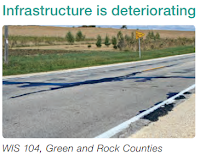 The agency has not updated a key spending report, “Transportation Budget Trends,” from its last two budgets. The reports have been produced for decades. Without them, “it’s essentially impossible now to do what used to be easy to track historical and current trends in terms of revenue and expenditure by category,” Mitchell said. The (next) report will be released in July.

HEAD EXPLODING BULLSHIT: One more thing that really pisses me off; Republicans love giving back surplus revenue tax dollars, but then complain we don't have enough revenue to fund programs. Arrrrrrrrr!!!!


Walker, speaking at the Republican Party state convention Saturday, did not emphasize transportation as a key part of his re-election platform ... directing state agencies to prepare spending plans for 2019-21 with no increases in revenue...The move is in contrast to what Republican legislative leaders, including Senate Majority Leader Scott Fitzgerald and Assembly Speaker Robin Vos, have said: the state needs to raise more money to adequately address roads.

Some extra charts from 2013 about public spending, that has only increased since then...not in transportation: 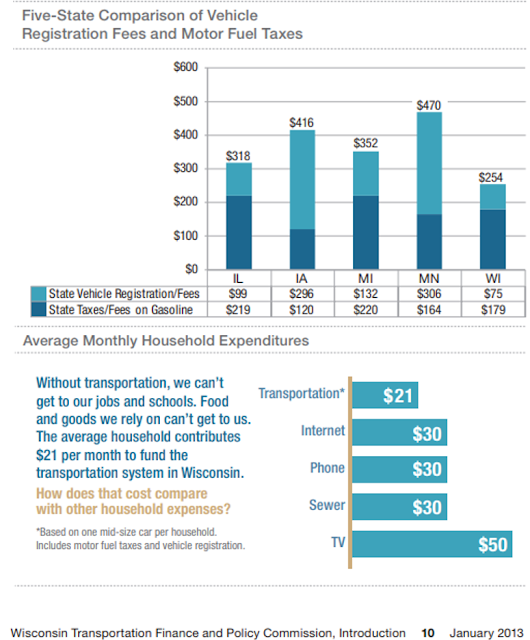