Trump Steps over the Line....

Republicans have always told us not to expect anything from the government, and oddly, a lot of people have not just bought into that idea, but have greatly lowered their expectations as well.

In the preamble to the Constitution, we're guaranteed the basics; "to form a more perfect union, establish justice, insure domestic tranquility, provide for the common defense, promote the general welfare..."

What part of violating human rights, do nothing about mass shootings, deny the public health care, and endangering the environment supports the constitutional framework that set up a "government to make society a better, more orderly place to live?"

Huddled Masses Yearning to Breathe Free...Unwelcome: Nothing is free, and under millionaire Trump, even breathing. His directive to take border crossing kids away is the latest, which by the way, he's now blaming on Democrats?:

The United States government is now systematically taking children as young as 53 weeks old away from their parents at the border, thanks to new directives issued by the Trump administration. 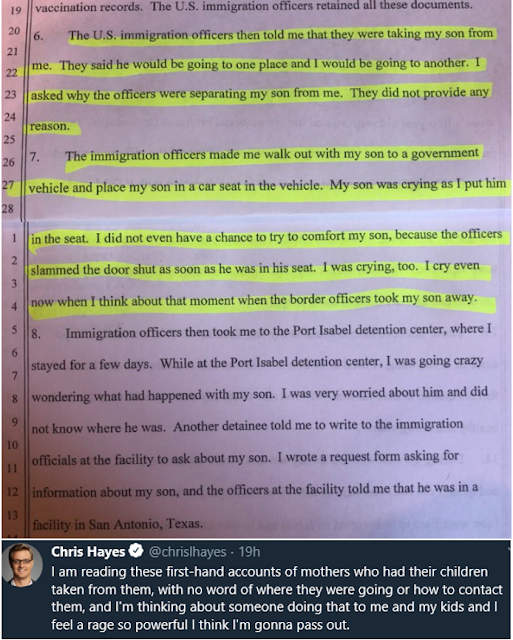 Labels: Immigration
Email ThisBlogThis!Share to TwitterShare to FacebookShare to Pinterest