Scott Walker's Wisconsin promises to be nothing like the Wisconsin I grew up in. Our sense of history, tradition and state identity have been thrown under the wheels of Walker's "Forward" moving bulldozer for the last seven years.

I wrote this back in September of 2011: One numskull by the name of State Rep. Dale Kooyenga, and originally from south of the cheddar curtain, is trying to do away with a law that requires restaurants to offer butter for crying out loud. Kooyenga said to the Journal-Sentinel the existing law is "silly, antiquated and anti-free market."

The law Kooyenga seeks to replace also requires that butter be served to students, patients and inmates at state institutions, except as necessary for the health of the person. In accordance with the law, butter is served to the roughly 21,000 inmates in Wisconsin's prisons. Kooyenga argues that changing the law would save the state money since margarine is typically a third of the cost of butter.

Yeah for proposing a more convoluted law to replace the “old” butter law on the books. Let's give everyone unhealthy cheap trans-fat loaded hardened oil to clog up their arteries.

Republican Lobbyist wants to ditch "America's Dairyland" on our License Plate, a tradition since 1940 : The fact that something like this even occurred to the president of Wisconsin Manufacturing and Commerce, someone who is supposedly promoting business in Wisconsin blows our collective minds. Rural conservative farmers, are you getting it finally that your party has ditched you for Foxconn? 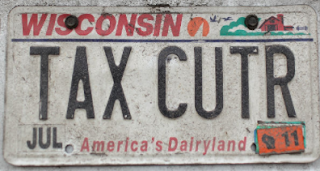 We've been America's Dairyland — at least on license plates — for 77 years. Wisconsin Manufacturers and Commerce President Kurt Bauer told a group Monday that it might be time to rethink the dairy-flavored license plate slogan. Bauer says that other slogans like 'Forward' might be more appropriate to modernize perceptions of the state's economy, rather than just focusing on agriculture.

Bauer ... referenced plans by the Taiwanese company Foxconn Technology Group to locate a high-tech display screen factory in Racine County. Bauer called Foxconn “our mega-opportunity.” Later Monday, Bauer clarified in a follow-up email that his organization would not lobby lawmakers in favor of the change, adding that it’s only a “conversation starter.”

Yes, let's use something new like the state 's 150 year old motto "Forward."


Bauer said “To me, ‘Forward’ connotes resolve, indomitability and progress — not a bad image to project to the rest of the world. It can draw people into the state.”

Here are a few reader comments to this story:

"Come on. Bauer says America's Dairyland might make people hesitate moving to WI to work ... based on what? Agriculture is still the largest industry in the state. Dairy is the largest segment of that industry with over nine thousand businesses called dairy farms. Nearly 1,400,000 Wisconsin cows are producing about 3.5 billion gallons a of milk (or 30 billion lbs if you like). The state produces about 3.2 billion lbs of cheese. Just a heck of a lot of butter and liquid milk. America's Dairyland should stay right where it is on the plates ... although, I do like 'Eat Cheese or Die.'" — Lloyd Schultz