How many times have you heard Republicans whine about "unelected bureaucrats" making policy? Too many times, I know. So guess what...?

WSJ: The Wisconsin Department of Natural Resources is trying to open up another quiet northern woodland to motorized off-road vehicles. But this time the DNR plans to use a less-formal approach that allows an agency administrator to make the decision rather than running it through the department’s policy board ... (telling) an association of area property owners that an agency administrator would decide whether to approve a trail in the Turtle-Flambeau Scenic Waters Area. That’s a switch from a previously announced plan...

Poof! Can't use "Unelected Bureaucrat" anymore? The party claiming to have a higher calling isn't messing around, and won't be stopped:

A public meeting on the proposed amendment was scheduled, but in a March 15 email the DNR ... canceled and said another would be scheduled ... When members of a lakefront association asked why the change was made, the DNR said in a March 23 email obtained by Bewley’s office that the proposed trail “meets the definition for a variance but not an amendment” based on the state administrative rule that governs park planning.

In other words, "unelected bureaucrats" will decide anyway, for ATV special interests of course, despite public opposition: 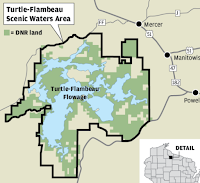 The Turtle Flambeau Flowage and Trude Lake Property Owners Association opposed the trail, saying it would run counter to the recreation area’s objective of preserving a natural and scenic landscape.

“We believe that an amendment to this plan to allow for additional motorized trail development would radically alter the entire scope of the management plan and go contrary to the #1 objective,” association president Jeffrey Malison told the DNR in a Jan. 25 letter.

Hear those ATV's Engines Roar: Wouldn't it be great to drive through scenic areas once intended to preserve the states natural habitat and showcase Wisconsin's great outdoors?


The Turtle-Flambeau Scenic Waters Area covers more than 8,000 acres of submerged land and about 200 islands in Iron County near the border with Michigan’s Upper Peninsula. The state purchased the land in 1990. It is popular for hiking, primitive camping and fishing for walleye, muskies, bass and perch. The area is home to the state’s largest populations of bald eagle and osprey, the DNR says.