Vukmir loves Trump's Merit Based Immigration plan, after her own family benefited from chain-migration.

Sen. Tammy Baldwin...you gotta laugh at this one.


State Senator Leah Vukmir made stops in Mauston and Reedsburg to make her case ... Vukmir says she is strongly supportive of President Trump and his agenda. 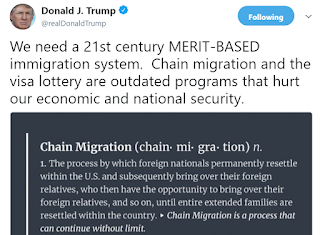 Did jaws drop in Mauston and Reedsburg when Vukmir gave the following heartwarming story about...and I'm not kidding, her own chain immigration family members becoming U.S. citizens?  Yup, Vukmir strongly supports the wall and merit-based immigration...just not for real Americans like Vukmir's family;


“My childhood memories are watching my aunts and uncles come to this country, my father came from Greece, my mom was from here but her parents were from Greece,” Vukmir said. “I watched them go through a legal process of becoming citizens. I helped them around the kitchen table study for their naturalization and citizenship tests.”

She feels that experience has shaped her conservative views on immigration today.

“The wall has to be first and foremost,” Vukmir said.

She is obviously not connecting the two ideas. That's the kind of thinking we need in Washington?
Posted by John Peterson, Democurmudgeon at 4/24/2018 12:07:00 PM