Ryan censored and fired the House Chaplain for his Prayer asking for "benefits balanced and shared by all Americans" in the Tax Cut bill.

Paul Ryan doesn't just attack poor people, he's taken his Roman Catholic "teachings" and oddly weaponized them against religion itself, including a Jesuit Chaplain in the House:

Ryan's office first announced Conroy would "step down" in an April 16 statement ... In his resignation letter, Conroy noted that he was stepping down "as you have requested." Conroy told the NY Times that Ryan said to him, "Padre, you just got to stay out of politics."

What was that outrageously political message Ryan will no longer tolerate in the majority Republican government?


A November prayer ... which Conroy appeared to criticize the GOP's tax cut legislation and included the line: "May their efforts these days guarantee that there are not winners and losers under new tax laws, but benefits balanced and shared by all Americans."

The coverage from NPR is scathing. Ryan had nothing to back up the firing:


Republican Walker Jones (NC): "No preacher or priest should feel that someone at the highest level, meaning the speaker of the House, is going to determine whether that prayer was right or wrong because this was given as he felt God put in his heart."

The Word of God-like Policiticans: Paul Ryan has been using his bizarre interpretation of religion to hammer the poor in bill after bill, and theologians have had it. From 2012, Ryan had another run-in with a group of Jesuits. Check out Chris Matthews on point dissection and other examples listed below: 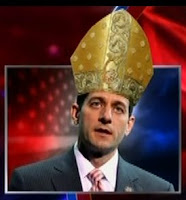 Paul Ryan visited Georgetown University, the flagship Jesuit school and decidedly hostile terrain for Ryan's strain of economic libertarianism, where he argued for his budget's priorities despite vocal and visible protests by faculty and students … sought to justify his budget priorities in terms of the Catholic principle known as "subsidiarity." "Subsidiarity" has been central to how the church envisions a just and equitable society functioning in a world dominated by big business and big government, both of which can dehumanize individuals and undermine the common good. "The principle of subsidiarity protects people from abuses by higher-level social authority and calls on these same authorities to help individuals," says the Vatican's Compendium of the Social Doctrine of the Church.

University of Dayton theologian Vincent Miller called (Ryan's) interpretation the "careful lobotomization of subsidiarity." In his 1961 encyclical, Pope John XXIII articulated another element of subsidiarity, writing that, "In a system of taxation based on justice and equity, it is fundamental that the burdens be proportioned to the capacity of the people contributing."

When the bishop chairing the U.S. Conference of Catholic Bishops' said the GOP budget Ryan spearheaded failed to meet a basic moral test -- and described cuts to programs that fell heavily on children and other vulnerable populations as "unjust and wrong" -- Ryan curtly dismissed those concerns as not reflective of all church leaders.

Pope Francis argued in May, imploring followers instead to focus on combating trickle-down economics and the world of inequality it produces. Ryan has a more condescending response to a pope who blasts "trickle-down" theories as "naïve" and denounces "an economy of exclusion and inequality." "The guy is from Argentina," he scoffs. "They haven't had real capitalism in Argentina. They have crony capitalism in Argentina. They don't have a true free enterprise system."