Ryan, the wonk genius, spews stupid again....Deficits + "Baby boomers retiring was going to do that" = ?

There's no excuse for the following comment...none. It's a lie and another show of ideological obedience. MSNBC:


Speaker Paul Ryan (R-Wis.) says that trillion-dollar deficits could not have been avoided by the GOP-controlled Congress, responding to critics within his party who say that leaders have behaved irresponsibly.


“That was going to happen. The baby boomers retiring was going to do that,” Ryan said on NBC’s “Meet the Press” of projections that the country will start running trillion-dollar deficits as soon as 2020.

Here's what FactCheck.org wrote about Wisconsin's embarrassment, Paul Ryan. What he said...:


Ryan: "That was going to happen. The baby boomers’ retiring was going to do that. These deficit trillion-dollar projections have been out there for a long, long time. Why? Because of mandatory spending, which we call entitlements. Discretionary spending under the CBO baseline is going up about $300 billion over the next 10 years. Tax revenues are still rising. Income tax revenues are still rising. Corporate income tax revenues. Corporate rate got dropped 40 percent, still rising."

Which means...he's lying again. At a time when baby boomers were retiring, he's made it almost impossible to save them from certain economic disaster:


Overall, CBO says the new tax law “increases the total projected deficit over the 2018–2028 period by about $1.9 trillion,” mostly because of a reduction in individual income tax revenue and an increase in debt service. 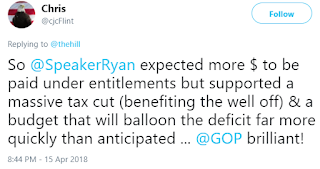