Anytime Scott Walker makes an unusual effort to mention the "blue wave" every time he opens his trap, you know he's up to something. And then it occurred to me - see the tweet: 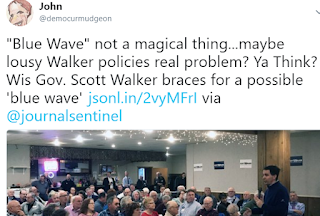 Walker is just too busy pushing his dystopian Republican vision based on creaky old talking points that don't seem to have any connection to real-Wisconsin problems. Worse still, he hasn't done anything to protect...America's Dairyland???

Fighting for the Dairy State...Not Walker: Even if the problem of plummeting milk prices edges beyond the states cheddar curtain, he could take a leadership role trying to solve the problem.

His rural supporters better wise up fast, because the clock is ticking, and the stories about "dairy" disasters are now piling up. WKOW:


WKOW: It was always Kyle Kurt's dream to run his own a dairy farm. The owner of Kurt Dairy has been in the farming business since he was a teen. “I started working for the previous owner when I was about 13 years old. And I’ve worked for him up until I brought it,” he said. Milk prices have taken a dramatic turn downward over the past four years. After more than 15 years of running "Kurt Dairy" in Dane County, owner Kyle Kurt was forced to put it up for auction due to the prolonged low milk prices.

His farm has been struggling for the past two years. Kurt thinks there is too much milk in the market, which has contributed to the lower prices. “In 2014, for a couple months, we got around $24, $25 a hundred,” he said. But he said they need at least $18 just to break even. Kurt feels if prices don't take a dramatic turn upwards, there won't be many small family farms left. “Especially for a young person to start farming is virtually impossible. You're going to have to have a lot of backing from generations before you to get into dairy farming.”

Kurt isn't the only farmer in the area who is struggling. A neighboring farmer says low milk prices have forced him to put his cows up for sale.” Just a mile away, James Mulcahy's dairy farm is up for sale because of low milk prices. “It's very tough. It's very disheartening because we've stuck a lot of soul into that place. We're 3rd generation. It's not easy,” he said.


Scott Walker's $3.6 million budget cut to the UW Extension should get rural Republican voters riled up. It continues the Republican assault on their own rural constituents that keeps them frustrated and angry at their own government. The UW Extension "provides farmers with technical assistance, nutrient management and more," but those days are slipping away, thanks to cuts signed by Walker.

Now we're seeing the devasting consequences of not taking care of the Dairy State:

The venerable county agriculture agent has been the best friend of Wisconsin farmers for more than 100 years, but steep budget cuts have reduced their numbers in a key ag-rich part of the state at a time when their knowledge and unbiased advice are in high demand. Grant, Green and Lafayette counties — three of the state’s top corn- and soybean-producing counties — have started the year without full-time ag agents even though the counties have paid the fees required for them by the UW-Extension, according to Rep. Todd Novak, R-Dodgeville ... operating with 15 fewer ag agents than in 2017 ... Green and Lafayette counties have been told there is no money to hire more agents for their offices this year, Novak said.

Karl Martin, the dean and director of the Extension’s cooperative division, said the reduction in ag agents is a function of working within a budget that was cut by $3.6 million two years ago as part of the 2015-17 UW System budget, which was reduced $250 million.

But Novak called the decision to bypass Green and Lafayette for full-time agents “absurd. They are two of the most ag-dependent counties in the state. They should be a priority.”

Added Lafayette County Board chairman Jack Sauer: “This is about as bad as I’ve seen it for farmers. These are times when a farmer really needs an ag agent.”

Farmers and farm advocates say the cuts couldn’t come at a worse time. Many farmers are already stressed by continued low grain and dairy prices and a cold, snowy spring that is threatening to delay the planting season. “I think we’re starting to see some of the long-term effects of those budget cuts,” said Sen. Janis Ringhand, D-Evansville. “So it’s all kind of coming together in a worst-case scenario right now.”

Even PBS's Market to Market went to our dairy farmers to get their input, unlike Scott Walker who's too busy crying about a "blue wave" all the while plundering the environment by welcoming in sand and mineral mine companies, filling wetlands for developers, and permitting more high capacity wells that drain drinking water and lakes:

Tony Pecha, Dairy Farmer: “Basically when we went from a milk price in the low twenties to a milk price in the high or even middle teens, we basically just ate into our equity. We burnt up a lot of equity the last few years, and farmers our age, in their middle 50’s, you know we don’t have time to recoup that equity.”

But growth in specialty cheese demand isn’t enough to raise milk prices nationally, or globally.
Tony Pecha, Dairy farmer: “There’s no easy solution in it- right now the only way things get better for us is on the backs of another farmer. When there’s a drought or disaster or something in another part of the country or another part of the world, that will affect everything and we will do better. But on a world economy, its going to be very difficult to try and develop something that will work for all of us, yet still compete worldwide.”

Long term, the dairy business has a challenging outlook. Consolidation has reduced the number of dairies in the United States by nearly half since 2000 - while the dairy herd has expanded by 2.5 percent to 9.4 million head. Milk production per cow increased 20 percent over the same period.Those still milking agree, prices will need to rise to a profitable level or more operations will be forced out business, accelerating consolidation of the industry - a condition some find hard to swallow. Tony Pecha, Dairy farmer: “A decent cost of living and a little profit is all most of us are asking for.”