Tax surpluses sure sound nice, but the way we got them will haunt Wisconsin for decades and destroy our vibrant parks and tourism industry.

In 2015, Gov. Scott Walker eliminated state funding for the state park system, more than $4.5 million per year, with the goal that the parks become "self-sustaining."

Well, that didn't work. Big surprise, since state lawmakers were warned similar cuts haven't worked anywhere else in the country. By the way, did you know park and camping fees increased in the last four years?

Republicans are now suddenly backfilling those cuts, by plundering the $10 million operating budget used to run the parks so they can supplement the $1 million already being spent so they can eliminate potential health hazards and replace the parks crumbling infrastructure without falling too far behind. Jakes Wisconsin Funhouse:


An additional $2.2 million would transfer in the 2017-18 fiscal year from the balance of the parks account to the appropriation to be used for parks infrastructure projects ... (replacing) vault toilets in campgrounds ... failing water lines, day-use flush toilet building upgrades, replacement of indoor group camping siding ... ADA-accessible restroom ... renovating plumbing at various shower buildings ... improvements to beach and swimming areas...

Disappearing Watch Towers No Big Deal? If Scott Walker had his way, the watchtowers in many of our state parks that give visitors those majestic views of Wisconsin's incredible countryside...would just disappear forever:

WHA: Visitors to Potawatomi State Park have caught the same view since 1932: a sweeping panorama of Sawyer Harbor, Sturgeon Bay and Green Bay, broken up by miles of green, auburn or yellow forest, depending on the season … the park’s 75-foot-tall observation tower built when Herbert Hoover was president ... the Wisconsin Department of Natural Resources (will) permanently closed the tower, citing significant wood decay that made the tower unsafe … there are no plans to replace the tower.

Walker has no plan to replace the tower, who cares right, it's not a priority?  And this wasn't the first time a tower would have been lost to time under Walker's watch: 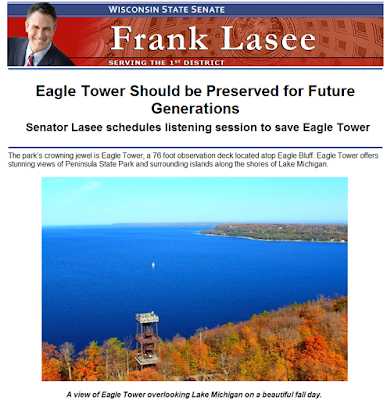 Ironic, former Sen. Frank Lasee voted to defund our state parks, but then became a victim of his own bad policy decision. You can read his pathetic email newsletter response at the bottom of this post. Question; conservative voters trust Republicans to run the government?

Its removal comes just two years after the DNR removed Eagle Tower at Peninsula State Park near Fish Creek. In that case, the DNR also cited decaying wood. But there are plans to replace Eagle Tower. A final design was selected in November, but construction has yet to begin. An independent nonprofit group, Friends of Peninsula State Park, is working to raise half of the funds required for that tower, which would include a ramp.

But some, like state Sen. Robert Cowles, R - Green Bay, are concerned about both the slow pace of the Eagle Tower replacement and the impending removal of the Potawatomi State Park tower. Cowles says the loss of the towers could have a "chilling effect" on local tourism. But he says they’re just a piece of the problem. "I am concerned about the observation tower, but I am also concerned about the broader situation with maintenance of our state parks ... These parks are not to be taken for granted, and I think to a certain extent, our government has done that. And because of that, there’s not enough money to maintain that."

But as Cowles argues, that hasn’t happened. He says the state’s eroding towers and trails, and the need for private funding for a state-owned tower, is proof.

Over the past several weeks my office has heard from many constituents and business owners concerned about the DNR’s closure of Eagle Tower and future plans for this historic site. With an economic impact to the local community that totals nearly $37 million, it is essential that all park attractions at Peninsula remain open to the public.

The DNR has not yet made a final decision on the future of Eagle Tower – their initial indications have been negative. To encourage the department to repair or replace Eagle Tower and to show community support, I have scheduled a public listening session I fully support the rehabilitation or, if necessary, replacement of Eagle Tower so that future generations may enjoy this historic site and share in the grandeur of Wisconsin’s State Parks.

Having Eagle Tower closed is unacceptable. With your help we can convince the DNR that Eagle Tower is an irreplaceable local treasure.