It's both frustrating and amusing to watch Republicans cut every business tax they can find and then offer taxpayer handouts on top of that. And yet, what Republicans ideologically steer clear of is one of the biggest drags on business; employer health insurance. If they really wanted to help business, they could pass a nationwide all-payer system that takes insurance off their backs completely.


On average, inpatient and outpatient treatment for opioid addiction and overdose added about $26 per person to the annual cost of health benefits coverage for large employers in 2016, up from about $3 in 2004. 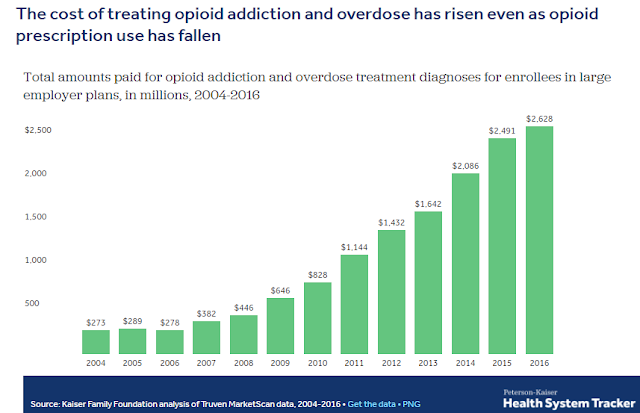 Republicans again want to just add to the problem:

The first study found the passage of medical and recreational marijuana laws led to reductions in Medicaid opiate prescription rates of 5.88 percent and 6.38 percent, respectively.

That's a huge saving, and yet Republicans are again willing to waste lots of money staying true to their backward principles:


The Trump administration has taken an adversarial stance toward states that have legalized marijuana in some fashion. The Justice Department rescinded an Obama-era policy of noninterference for state-legal marijuana operations, and the attorney general has expressed an interest in prosecuting medical marijuana providers.

Overspending is not the issue for Republicans. They've got outdated cliches to cling to:

President Trump called on researchers to “come up with a painkiller that’s not so addictive.” The latest studies suggest that such a painkiller already exists — it is called marijuana, and it is legal for medical use in 29 states and for recreational use in 9 states plus the District.

“The studies are the latest in a long line of research showing that marijuana availability is associated with reductions in opiate use and misuse,” Christopher writes. The first study, by Hefei Wen of the University of Kentucky and Jason Hockenberry of Emory University, is significant for finding a link between recreational marijuana and opiate use, as most previous research has focused on medical marijuana.

"There is widespread agreement among doctors and public-health experts that marijuana is effective at treating chronic pain," Christopher writes. “These findings suggest that medical and adult-use marijuana laws have the potential to reduce opioid prescribing for Medicaid enrollees, a segment of population with disproportionately high risk for chronic pain, opioid use disorder, and opioid overdose.”