The Myth of the "Fiscal Conservative."

I thought it was funny how Republicans were planning to put the Democrats on the spot for the midterms, by forcing a vote to make the middle-class tax cuts permanent instead of phasing them out to pay for the corporate tax cuts. I guess that passes for strategy these days.

Yet I think most Americans are wise to the scam: 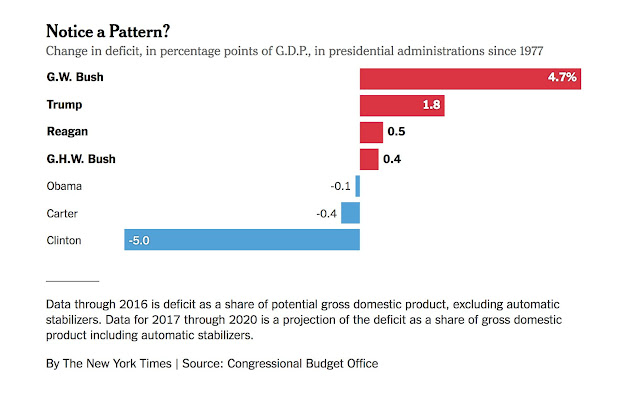 1. The Republican-controlled Congress followed up their corporate tax cuts with a massive omnibus budget that boosts spending past previous budget caps by $300 billion over two years.

2. Most Americans have not noticed a larger paycheck since the law was enacted, according to a CNBC poll released in March.

3. A recent analysis from the pro-reform group Americans for Tax Fairness found that 433 corporations out of the Fortune 500 have not offered any bonuses or wage increase to employees since the passage of corporate tax cuts. Instead, the analysis found, companies spent 37 times as much on stock buybacks.

4. Just 27 percent of Americans think the GOP tax cuts were a good idea, according to a new NBC News/Wall Street Journal poll released on Monday. In other words, the Republican tax plan has actually gotten less popular with voters over time. But popularity was never really the goal, was it? The point was to starve the federal government of tax revenue in order to justify slashing the social safety net — something Republicans in Congress and the White House began to address in earnest last week.

5. On Tax Day 2018, just one week after House Speaker Paul Ryan announced his retirement at the age of 48 — after spending his entire adult life on the government “dole” — Republicans have once again laid bare their true intentions. Passing a deficit-busting tax bill was intended to explode the national debt and thereby endanger future funding for the tattered remnants of the social safety net that survived welfare reform in the 1990s — including Medicare, Medicaid and Social Security.